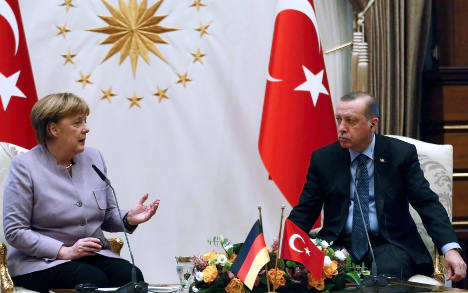 “We brought to the agenda the putschist soldiers whose asylum applications have been accepted and gave a firm reaction,” Erdogan said, referring to his meeting with Merkel on the sidelines of a NATO summit in Brussels on Thursday.

“We asked: 'How can you do this?'” Erdogan said, quoted by the Hurriyet newspaper.

Since the coup attempt, dozens of Turkish diplomats and high-ranking officials have sought asylum in Germany as Ankara continues its crackdown on those suspected of links to US-based Muslim cleric Fethullah Gulen, whom it accuses of ordering the coup.

But Erdogan said Merkel told him asylum approval “was not up to her”.

Relations between Berlin and Ankara have been strained since last July's attempted putsch, but have deteriorated further over several issues including the referendum campaign to expand Erdogan's powers.

Erdogan hit back at Germany's “fixation with Deniz”, saying he told Merkel: “I reminded them: 'You have many Deniz, I gave you these documents'.”

He was referring to 4,000 dossiers which Turkey previously said it gave its Berlin colleagues about “terrorist” suspects in Germany.

Germany's interior ministry said Friday that 217 of the asylum applications came from Turks holding diplomatic passports while another 220 were from people with passports issued to other government employees and their dependents.

It is not known officially how many have been given asylum or how many are from the military.

Erdogan also said that the issue of German lawmakers wanting to visit the Incirlik military base near Syria was also discussed by the two leaders.

Ankara refused to allow German lawmakers to visit the base this month, and Erdogan said Turkey wanted a list of those who would visit because some MPs “openly support terrorists”.

The lawmakers called off their visit but not before Berlin warned it could move its 250 military personnel stationed at the base to another location in the region, most likely Jordan.

The German forces at the base fly Tornado surveillance missions over Syria and refuel flights for partner nations battling the Islamic State jihadist group.