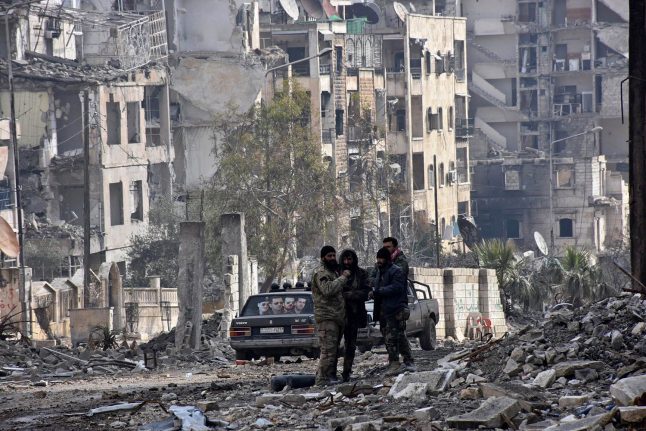 The destruction in Aleppo. Photo: SANA/EPA

With its battered facades, pulverized houses and skeletons of buildings, one of the world's oldest cities, Aleppo, has been utterly devastated by the war in Syria.

Now, in Germany, scholars are preparing for its reconstruction one day by creating a super-detailed map of the old city and its treasures, long listed as a UNESCO World Heritage site.

In a bright office of a university campus in Cottbus in the former East Germany, urban planner Christoph Wessling runs his index finger through the labyrinth of alleys and streets of Aleppo.

Spread across his large desk lies a huge map, measuring two by 2.5 metres (more than six by eight feet), drawn to a scale of 1:500.

It is an exceptional document that replicates the walled ancient city with its souks, hammams, mosques, churches and residential dwellings, with infinite precision and loving detail.

In total, some 16,000 plots have been traced, as well as 400 floor plans of the main buildings of this city, which has been inhabited continuously for over 6,000 years.

As the academic traces the ancient web of streets and alleys of the Silk Road city, his mind drifts back to a place that a 12th century poem described as being as old as eternity.

Aleppo was a city of hidden gems, recalled Wessling, who was a frequent visitor to the northern Syrian metropolis before the start of the war in 2011.

“In Aleppo, we would enter a house whose austere facade was absolutely nothing special,” he said.

And then suddenly we came upon a chain of three enchanting inner courtyards with richly decorated pillars.”

That was life before the country's commercial centre was divided between the rebel-held east and the loyalist-controlled west and became a main battleground of the civil war.

Aleppo became the scene of a major humanitarian tragedy in late 2016, before it was captured by the army of President Bashar al-Assad, backed by Russia and Iran.

In coming weeks the map, created by six experts with a budget of €60,000 ($67,000), will be put online and made available to anyone wishing to participate in the eventual reconstruction of Aleppo.

The online map will feature “all the site plans, photos and descriptions of a given place”, according to the university, which is handling the project with the German foreign ministry and German Archaeological Institute.

“We are not politicians,” said Wessling. “But as urbanists, we wanted to lay a foundation” so that the city can one day recover some of its peculiar splendour.

The hope is, he added, that construction companies don't simply bulldoze the ruins and build hotels and shopping malls atop the ancient rubble.

Syrian Cottbus student Zeido Zeido, 29, who is preparing a doctoral thesis on his hometown Aleppo, warns against excessive attention to the old city.

He said “there are other districts with more recent architectural styles that need to be protected, such as late 19th-century buildings” from the era when Aleppo was one of the main cities of the Ottoman Empire.

“There is no national heritage protection plan for the districts which are not classified by UNESCO,” he added.

The challenge of reconstruction will be immense, according to researchers at the Cottbus faculty of architecture.

According to UNESCO, about 60 percent of the old city was badly damaged and, of this area, 30 percent was totally destroyed.

In the souk, once one of the largest covered markets in the world, the stalls and wooden doors have been reduced to ashes.

The minaret of the famed Umayyad mosque collapsed four years ago, and the monumental Citadel has suffered “considerable damage” as have the caravan stops once used by Silk Road traders.

The Technical University of Brandenburg, Cottbus campus, was chosen to create the map because its architecture faculty has a long tradition of exchanges with that of Aleppo.

And Germany, given its World War II bombing, has a wealth of experience in rebuilding its cities, having also restored many urban centres after its 1990 national reunification.

At Cottbus, Zeido Zeido's thoughts wander off again to the city 4,000 kilometres (2,500 miles) away, recalling the days when he would “hang out in the streets with my friends”.

But what he misses most is the sandy hue of Aleppo, “a city built with a peculiar stone that gave it a unique colour” – and a feeling that the map before him, however precise, cannot bring back to life.

SEE ALSO: This map of Berlin shows how badly Aleppo has been destroyed