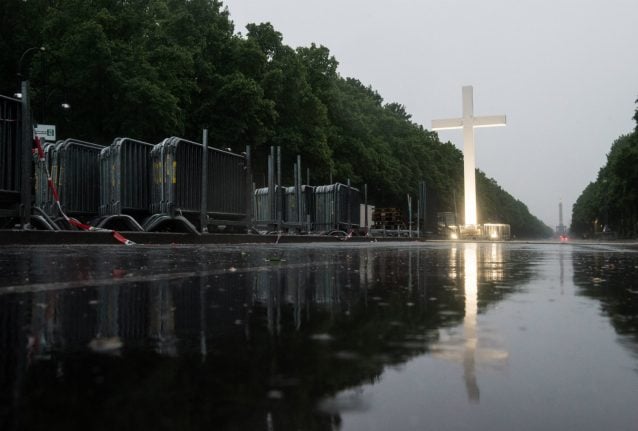 Around 140,000 visitors are expected in Berlin for the Church Congress marking 500 years since the start of the Protestant Reformation, which kicks off on Wednesday evening and lasts until Sunday.

Former US President Obama will be the star guest in the proceedings, discussing “engaged democracy” with Chancellor Angela Merkel in front of a crowd of 80,000 at the Brandenburg Gate on Thursday.

“Unfortunately the terror threat has been constantly high for a long time, so we've thought through every possible scenario,” police spokesman Thomas Neuendorf told Die Welt.

Neuendorf said that there could be small adjustments to security protocol after a suicide bomber attacked a concert in Manchester, United Kingdom on Monday evening.

“But on the whole, our security concept will stay the same same,” he said.

Berlin law enforcement will be supported by colleagues from across Germany, with 4,000 officers on duty. As well as cops from Baden-Württemberg and Rhineland-Palatinate, sniffer dogs from Schleswig-Holstein will be deployed to hunt for explosives.

This will also be the first Church Congress at which bags will be checked at the entrance to events, including when worshippers enter church services.

Around 2,500 events are scheduled for the five-day programme, which includes church services, Bible readings, discussions with politicians and concerts.

On the final day, visitors will travel around 100 kilometres to Wittenberg to celebrate an open-air church service.

According to tradition, Martin Luther published his 95 theses in the town on October 31st 1517, thus setting into motion the events which would lead to the split between the Catholic and Protestant churches.