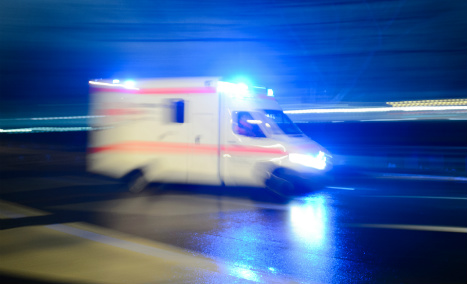 The woman intervened after the car in front of her hit a 5-year-old girl who ran unexpectedly into the road, police report. The little girl was injured in the accident.

Two relatives of the child immediately surrounded the driver. But when the 49-year-old woman got out of her car to try to mediate, they turned on her, first insulting her, then beating her.

She was left with serious head injuries, which needed to be treated in hospital.

On Monday the woman was still in hospital and could only open her eyes for a short period of time, the Rheinische Post (RP) reports.

Her right eye socket is fractured, while the left one is badly swollen.

“I need to stay here until the swelling goes down, then I can be taken to a specialist hospital for an operation,” she said.

According to the 49-year-old, the driver involved in the crash did nothing wrong.

“She drove at exactly 30 km/h, just like me. She stopped, got out, and took care of the child after the crash. But that didn’t interest the mob,” she explained.

“When I told them that the child rushed suddenly from between two parked cars, and that they should take better care of her, they turned on me.”

The woman now says she is preparing to take legal steps against the family, whom police describe as being “a southeast European clan.”

“They are sure to stick together and tell the police the opposite of what happened,” she said.

The men told police that they lightly pushed the woman, the RP reports.