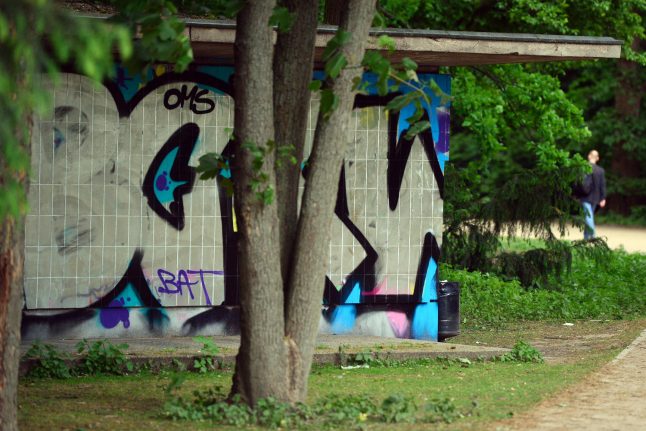 Farid sheepishly stands before a small bathroom shelter at the entrance of Berlin’s central Tiergarten park. Young men are going in and out, looking tired and worn out. Older men stop by off and on, while Farid appears tense. He darts his eyes here and there as if he is waiting for someone.

The 21-year-old came to Germany from Afghanistan, and now earns money in Tiergarten near the Victory Column through prostitution. This, he says, is his only way to make a living.

As other German media have previously reported, Farid is not alone in his occupation as a prostitute, which is legal in Germany. Exactly how many refugees in Germany are prostitutes, no one knows. Such cases are known in Berlin, Frankfurt and Hamburg, according to a survey by DPA.

The Berlin refugee aid organization Moabit hilft (Moabit helps) say they know of between 20 to 25 young Afghans, Iranians, Iraqis, and Syrians in Tiergarten alone who since the beginning of last year are earning money through prostitution. All of them are men, says Moabit hilft chair Diana Henniges.

In Hamburg there are “a couple of cases” known, according to a spokesman for Melanie Leonhard, the city’s senator for work, social affairs, family and integration. She said though that overall it is “not a major issue”.

In Frankfurt, AIDS assistance group KISS reports that they are in contact with about 20 refugees who offer sex for money.

“But the [actual] number is higher,” says counsellor Karin Fink, who has worked in the field for more than 25 years.

Part of why they do not know the total number is due to the language barrier. Therefore interpreters must be able to establish a “very high level of trust, so that what they say comes across and culturally normative conceptions are not also transferred with it.”

Farid, who did not wish to give his real name, left his homeland when he was ten years old. From there he went by foot to Iran. Two years ago, he left to come to Germany. His asylum application is still being processed. He does not know whether his family is still alive.

The young Afghan charges between €20 to €30 for sex, he says, and with that money he buys heroin, which he says he never did back home.

“I need that for my head,” he says, repeating this several times.

As Farid speaks, other young men continue to come and go. According to helpers, there are no minors present. But the other young men do not want to talk because they don’t want their families to know what they’re doing in Tiergarten. An older Iranian man, who says he is not there to sell sex, says that the rest are there for that reason. Four to five of them are HIV-positive.

According to Moabit hilft, part of what drives refugees to prostitution is that during the asylum application process, they have no access to language or integration classes.

“Underage refugees travelling alone are looked after. But as soon as they are adults, they are not cared for,” says Henniges.

Some of male prostitutes charge as little as €5 or €10 for sexual services, according to Fink from Frankfurt.

Many send a portion of the money they earn back home to their families, while others like Farid develop drug problems, or become addicted to gambling.

In total in Frankfurt, Fink estimates there to be around 600 to 800 male prostitutes, without counting those hired online, or “callboys”. These include teenagers to 40-year-old men.

She further explains that 25 years ago, three-quarters of male prostitutes were German nationals. By now, immigrants make up about 90 percent of this population, many of whom come from eastern Europe.

Jakob Pastötter from the German Society for Social-Scientific Sexuality Research (DGSS) said that these estimates are also realistic for other large cities. The DGSS president explained that this is because prostitution allows immigrant men to earn money relatively quickly and without problems.

“It is one of the few possibilities where someone can make money without language skills and a work permit,” Rötten said.

Some of the young men from Afghanistan may have already been involved in sexual work in their home country related to the practice of bacha bazi, Rötten explains. Literally meaning “boy play”, bacha bazi refers to sexual activities between often well-to-do older men and adolescents that may include child sexual abuse.

Farid says he is still waiting to hear about his asylum application decision, and thus whether he can find other work.

Returning to Afghanistan, however, is not an option.

“I would die there. Al-Qaeda is there,” he says, gesturing with his hand as if to pull the trigger of a gun.

He says that he would like to stop his sex work – and his use of heroin.

His biggest wish is for “someone to get this stuff out of my body.”