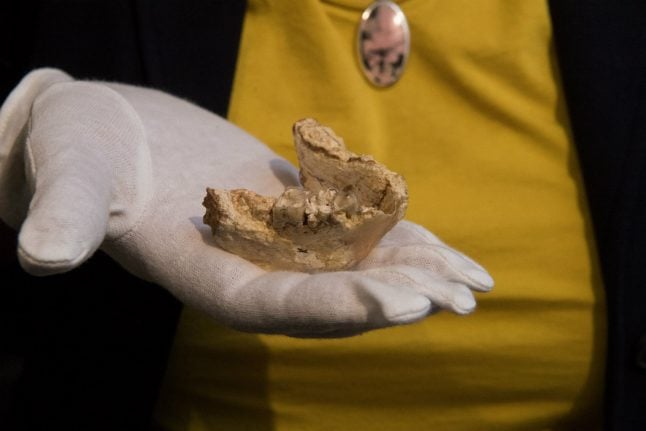 After studying the only two fossils found that belong to the hominid Graecopithecus freybergi, researchers at the Senckenberg Centre for Human Evolution and Palaeoenvironment (HEP) in Tübingen came to the remarkable conclusion announced on Monday, and set to be published in the PLOS One magazine.

Hominids include humans and our ancestors, plus apes and their predecessors.

Scientists have still to definitively prove when the lineage of humans and apes split. But current established theories suggest that the ancestors of chimpanzees – our closest cousins – and our own predecessors split from one another in Africa at some point between five million and seven million years ago.

But the team led by Madelaine Böhme have now placed a big question mark over this theory, after examining a jaw bone found in Greece and a tooth from Bulgaria, both belonging to the Graecopithecus freybergi.

After detailed study, the researchers believe that the Graecopithecus freybergi is a previously unknown ancestor of humans. Researchers found that the root of the tooth is largely melded, a characteristic of humans and their predecessors, but not of apes, who have split roots.

“We were surprised by the results, as previously pre-humans were only known from sub-Saharan Africa,” said Jochen Fuss, one of the scientists involved in the study.

For this reason, the Tübingen scientists postulate that the split between chimpanzees and humans did not take place in Africa, but in the east Mediterranean region.

The scientists believe that drastic ecological changes triggered the split between man and ape. In the sediment where the fossils were discovered, they found a red, fine-grained silt that is characteristic of deserts.

“This data could document for the first time that a Sahara spread out 7.2 million years ago, and that its desert storms blew red, salty dust all the way to the north coast of the Mediterranean,” said team head Böhme.

Böhme further explained to The Local that her team had found proof for the mechanism by which human ancestors split from those of chimpanzees.

“We have found evidence of a desert which emerged in the region of North Africa, which split human ancestors from those of chimpanzees. The desert existed for 700,000 years, meaning that no genes could be interchanged in this period,” Böhme said.

She added that there was no exact spot that could be identified as the birthplace of the modern human, as the development took place over a wide area. But she added that it was not southern Europe, where the fossils were found.

Böhme's researchers claim that a type of savanna stretched across Europe at the time. They found evidence of plants typical of a savanna in the sediment, as well as evidence of fires.

“Everything taken together points to there having been a savanna there. This also fits with the fossils of ancestors of giraffes, gazelles, antelopes and rhinoceroses that were found,” said Nikolai Spassov, co-author of the research.

“The savanna area of Europe provided an area of retreat for the pre-humans, but it was not where they originated,” said Böhme.