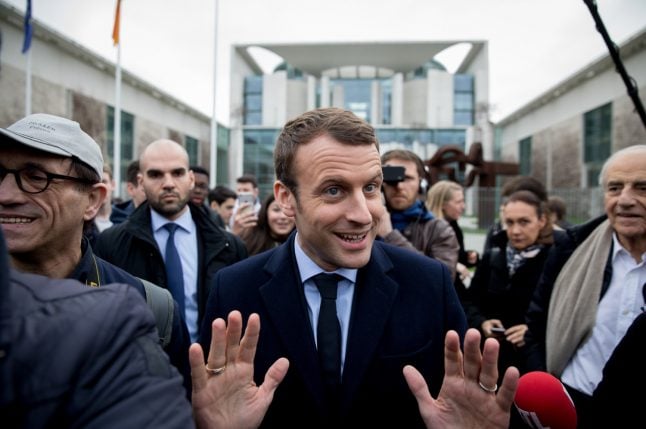 Emmanuel Macron in Berlin before his election win. Photo: DPA.

Macron has said he favours setting up a separate budget for the eurozone, the 19 countries that use the common currency, and also proposes giving the bloc its own parliament and finance minister.

But European Commission chief Jean-Claude Juncker had pointed out that “a major change with a eurozone finance minister and a budget would require a change in the EU's main treaty,” said Friederike von Tiesenhausen, finance ministry spokeswoman.

Amending the treaty would require approval from all 28 countries within the bloc, “which is at the moment not realistic,” she said.

Foreign Ministry spokesman Martin Schaefer also said: “There is agreement within the government that, given the difficult situations we in Europe are confronted with, a plan with treaty changes is not a good idea.”

While relieved that Macron had prevailed over far-right leader Marine Le Pen, German media have since begun warning that the EU reforms championed by France's new leader could be costly for Germany.

Saturday's edition of Der Spiegel weekly featured a picture of Macron with the headline “expensive friend”.

Hours ahead of Chancellor Angela Merkel's meeting in Berlin with Macron, her spokesman Steffen Seibert said one should not read too much into the alarmist headlines.

Merkel will “meet him with great openness,” he said.

“It is in Germany's interest for Emmanuel Macron to succeed,” stressed Seibert.