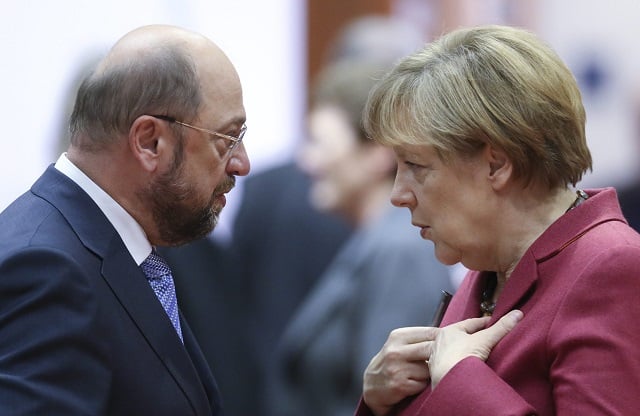 About 13.1 million eligible voters in North Rhine-Westphalia will cast ballots to elect a new regional parliament for the sprawling industrial region, which has a large migrant population and has been a Social Democratic Party (SPD) stronghold for decades.

But surveys ahead of the vote show the centre-left party running neck-and-neck with Merkel's Christian Democratic Union, with some even placing the CDU ahead.

The surveys were the latest indication that initial enthusiasm for the new SPD leader, Martin Schulz, could be fizzling out.

The SPD had been ailing nationwide but saw a surge in support in February when Schulz took over. That support failed however to translate into votes in the last two state elections, when the CDU won comfortably.

An election in Germany's biggest state is always significant, but it carries higher stakes this year, being the last regional vote before national polls and having a direct impact on whether the SPD can close the gap nationwide with the CDU.

After casting his vote in his hometown of Wuerselen, Schulz acknowledged Sunday that the race would be close, with 30 percent of voters deciding their pick at the last minute.

“That makes it thrilling to the last second. I hope of course that we will be ahead in the evening,” he said.

Separately, the CDU's candidate Armin Laschet, who cast his vote in Aachen, said: “There is a real chance that we can win. Now it's time for the voters to decide.”

In the run-up to Sunday's vote, Schulz held more than 30 rallies in the state, where he began his political career in his hometown of Wuerselen.

The party is banking its hopes on incumbent state premier Hannelore Kraft, 55, who secured 39.1 percent in a 2012 vote, while the CDU clinched just over 26 percent.

“If Kraft succeeds, then the chances of the SPD's bid to take back the chancellery grow. If she loses, it would mean that the Schulz train has slammed against a wall,” the weekly Spiegel magazine said.

Political analyst Oskar Niedermayer also noted the state's significance to the SPD, telling AFP that “a defeat there would be a disastrous symbol” for the party.

Schulz is hoping that his push for “social justice” will resonate in North Rhine-Westphalia, which has lagged behind western Germany economically. He argues that many people are struggling in temporary or low-paid jobs even though the country as a whole is growing richer.

But Merkel has also been pounding the streets in the state of 18 million people, including 4.2 million of migrant origin.

In the town of Haltern am See on Wednesday, she took aim at Schulz's arguments, saying the CDU offers “justice in the sense of jobs, strong budgets, funds for local communities”.

She also urged voters to look at her government's economic record – with 7.5 percent unemployment, the state fares worse than the national rate of 5.8 percent, she said.

“Through intelligent policies and solid finances, and by doubling our investments in research, we have managed to reduce the number of jobless people to half that in 2005 when I became chancellor,” she said, campaigning for CDU candidate Armin Laschet.

Mindful that local issues can tip the balance, Merkel has also blamed the incumbents for persistent traffic jams that “are longer than from here to the moon”.

The CDU has also accused the state's SPD-Green governing coalition of security failures.

Amri had lived in the state and was deemed a threat by intelligence officials, but Jaeger argued that there was insufficient evidence to lock him up.

On Jaeger's watch, Cologne also became the scene of mass sexual assaults by groups of mostly North African men on New Year's Eve of 2015-2016, inflaming the debate over the 890,000 asylum seekers Germany welcomed in 2015.

The populist AfD (Alternative for Germany), which has railed against the migration influx, hopes to win its first seats in North Rhine-Westphalia, which would give it seats in 13 of 1 state parliaments.