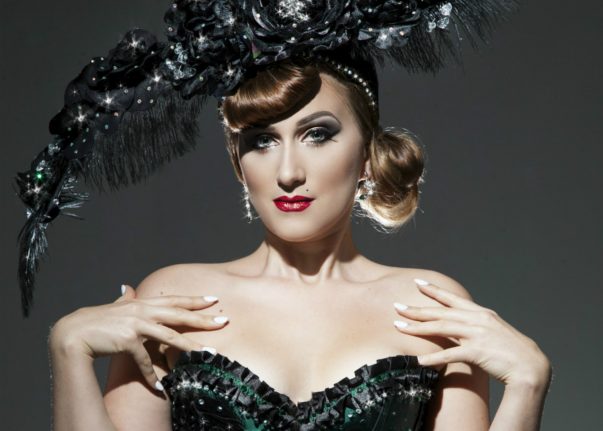 One recent gig stands out for Elena Gabrielle as being a moment when she questioned what on earth she was doing in Berlin.

She had been invited to perform at a fundraiser for Syrian refugees in the south of the city. It was around 3am, and when she turned up at the venue, it turned out to be a squat.

“I ended up performing to a group of 40 drunk punks and I just thought ‘where am I, and what am I doing here?’ But you’ve just got to roll with it and remember this is the life you chose. You never know what you’re going to be doing, which is half the fun of it,” Gabrielle tells The Local.

Eight months ago, the 28-year-old moved to the German capital from Melbourne, Australia to make a living as a burlesque dancer. Since then she has set up her own monthly show and regularly guest performs around town.

Burlesque, she says, is misunderstood by many people not so well acquainted with the scene.

“There is a lot more to it than what people might think. Obviously some people think burlesque is just stripping, which it is, but there are different styles. There is classic burlesque, which is American showgirls with glitz and diamantes, but you also have neo-burlesque, which is satirical – the word burlesque actually comes from the Italian for satire.

“Neo-burlesque is the kind that I do. I wouldn’t say I’m just a burlesque dancer. I sing and strip, but I’m also trying to say something. So a lot of my stuff is commenting on safe sex and women’s issues, but in a funny way.”

Her audience is almost always female dominated, signalling another major difference between burlesque and a regular strip show.

“The good thing about burlesque is that any woman can do it, whatever body shape. Generally it's people who have studied dance but whose legs aren't long enough or whatever, so they forge a career in this way.” “Women sit and watch it and say, ‘ah this woman's got cellulite,’ or ‘she's got small boobs, or big boobs like me’, which is empowering.”

Gabrielle, who had already danced burlesque for years in the southern Australian city of Geelong, was attracted to Berlin as being “the home of cabaret,” a place where singing and performance had been heavily satirical during the the raucous 1920s.

But when she arrived she found a gap in the market for exactly this kind of performance. In a city focused on showgirl acts, she has been able to forge a niche combining burlesque with singing and stand-up comedy routines.

Germans have responded well to the shows, she says, although they are often slightly overwhelmed at her openness to talking about almost anything on stage.

There have been more practical considerations, though.

“I’ve had to learn to speak slower. I’ve done shows where I’m confronted with blank faces and I think ‘ah God, they’re not liking this.’ But normally they’ll get it a couple of seconds later, or you get people translating in the front row… But going slow can be tough when you’re trying to deliver a punch line.”

And Germans have provided rich comedy material for her, particularly their full-on way of flirting with women.

“I was never really used to that. Australian men don’t really make a move at all.”

Despite her glamorous job, she has also had to deal with the same mundane hassles of moving to Germany as every other expat.

But some of the struggles are very much the luxuries of an artist.

“Trying not go out so much has been a challenge, too. When you’re an artist, you are such a night owl and you get invited out all the time, sometimes it's five in the morning and you just want to go home and sleep. Trying to get into a routine has been difficult,” she says.

And although much burlesque and cabaret is now performed in English, the 1920s spirit of Berlin is still very much alive.