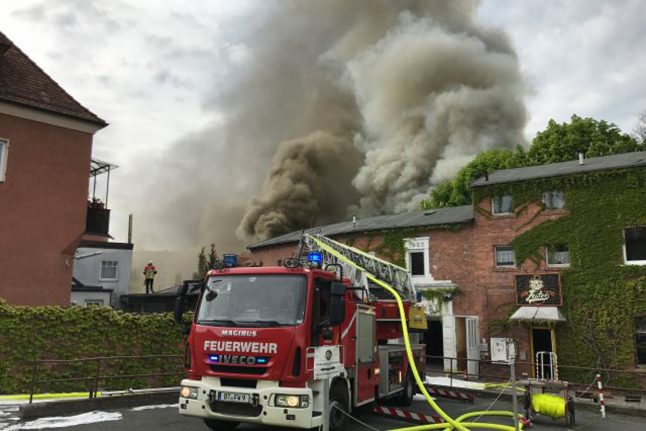 The fire in Bayreuth. Photo: DPA.

The fire that started on Thursday at about 4pm took five hours to subdue as black smoke billowed out above the town in Bavaria as the blaze engulfed the whole building where the club was located. Police said that eight people suffered from irritated airways due to inhaling toxic smoke, and were treated by medics.

Of the eight, two were workers at the club who had been preparing an event when the fire broke out. They had to be taken to a clinic to be treated for smoke intoxication.

Nearly 400 police, firefighters, and emergency workers were called to the scene.

Neighbours were advised to shut their windows and doors while the fire was ongoing.

Though police said the fire was under control by 9pm, there was still more work ahead to ensure there was no more danger to the public, going into the early hours of Friday morning. Police estimate the damage from the fire to be in the tens of thousands of euros.

The cause of the fire is still not clear, though one possible culprit could be pyrotechnic works inside the club.