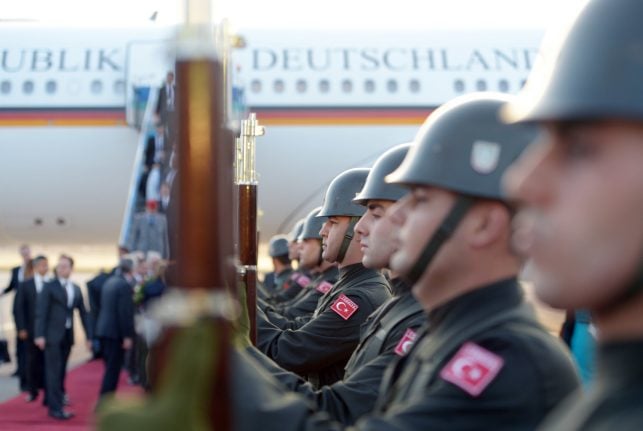 Turkish soldiers in Adana during a visit by former German President Joachim Gauck in 2014. Photo: DPA

Germany gave positive responses to the asylum petitions of the Turkish nationals holding diplomatic passports, the Sueddeutsche Zeitung daily and public broadcasters WDR and NDR reported. The reports were not officially confirmed by authorities.

Since the unsuccessful coup attempt in July last year, dozens of diplomats, judges, and high-ranking Turkish officials have sought asylum in Germany as Ankara presses ahead with a vast crackdown on alleged supporters of Fethullah Gulen, the US-based preacher who Ankara blames for the coup.

“We regret that Germany is accepting asylum requests of some former military personnel” linked with Gulen, the Turkish foreign ministry said in a statement.

Gulen, who has been in exile in the United States since 1999, has denied the charges.

“The German decision is a step that is not in line with the spirit of alliance and multi-faced relations between our countries,” the statement added.

The ministry said allowing the asylum requests would mean “tolerating and embracing a pro-coup mentality,” urging Berlin to review its decision.

After the failed putsch, Turkish authorities fired, suspended from their jobs or detained over 100,000 people for alleged links to coup plotters or to Kurdish militants.