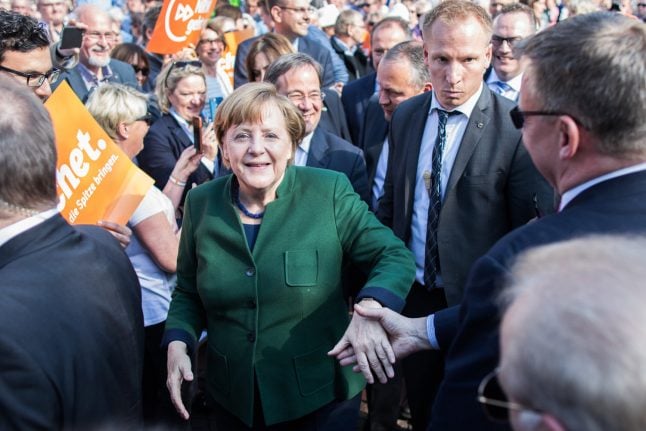 Angela Merkel at a campaign event in Haltern am See, North Rhine-Westphalia ahead of the election. Photo: DPA.

One in five German voters – 13.1 million – will cast ballots in North Rhine-Westphalia, a sprawling industrial area with a big migrant population which has been a Social Democratic Party (SPD) stronghold for 50 years.

But surveys show the centre-left party running neck and neck with Merkel's Christian Democratic Union (CDU), adding to indications that initial enthusiasm for new SPD leader and challenger Martin Schulz could be fizzling out.

The SPD had been ailing nationwide but saw a surge in support in February when Schulz took over. That, however, failed to translate into votes in the last two state elections, when the SPD took a hammering and the CDU won big.

“In a region where the SPD should be leading the CDU by 10 points, even if we tied with the party, it would already be a clear signal before the general elections, showing that the Schulz effect is over,” said Wolfgang Partfoerder, 67, a former CDU mayor.

“If Kraft succeeds, then the chances of the SPD's bid to take back the chancellery grow. If she loses, it would mean that the Schulz train has slammed against a wall,” said Spiegel weekly.

Political analyst Oskar Niedermayer also noted NRW's significance to SPD, saying “a defeat there would be a disastrous symbol” for the party.

With much at stake four months before national elections, both Merkel and Schulz are pounding the streets in NRW where 18 million people live, including 4.2 million of migrant origin.

Speaking in the town of Haltern am See, Merkel urged voters to look at her government's economic record, noting that NRW, with 7.5 percent unemployment, lags the nationwide 5.8 percent.

“You have on Sunday the possibility to shape your lives and maybe change it,” she said, campaigning for Armin Laschet, the CDU candidate.

Merkel has criticized the incumbents for “persistent traffic jams… costing commuters in NRW time that they could well use in other ways”.

Schulz joins Kraft on Thursday in Leverkusen, Aachen and his hometown Wuerselen.

Even a win may not suffice for the SPD, as the score would be measured against its 2012 polling of 39.1 percent.

The CDU clinched just over 26 percent then as voters punished Merkel for her hardline austerity drive at the height of the eurozone crisis.

SPD supporter Guenter Kadelka, 63, said he still hopes his party will prevail, even though “the Schulz surge has faded. We don't hear about it anymore.”

Schulz is talking up Kraft's record, saying NRW boasts “the lowest number of unemployed in 23 years, a budget surplus for the first time in 43 years, leads Germany in terms of social housing built and is a trailblazer against tax evasion”.

But the SPD-led state – it governs in coalition with the Greens – has also come under attack over its security record.

Amri had resided in the state and was deemed a threat by intelligence officials, but Jaeger argued that there was insufficient evidence to lock him up.

SEE ALSO: Everything you need to know before the vote in North Rhine-Westphalia