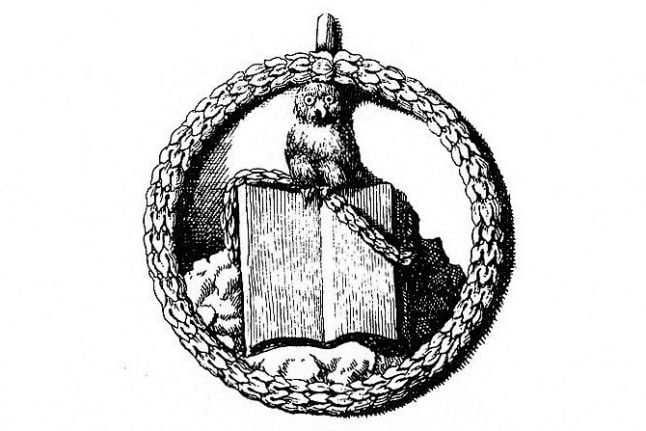 The Owl of Minerva, a symbol of the Bavarian Illuminati. Photo: Wikimedia Commons

In late 18th century Bavaria, Adam Weishaupt was a professor in ecclesiastical law at the Catholic-controlled University of Ingolstadt, living an apparently quiet academic life.

But then in 1784 a scandal broke, after which it was revealed that a secret organisation had infiltrated the highest echelons of Bavarian power, and one Adam Weishaupt was at the heart of the conspiracy.

The young professor was forced to flee Bavaria, settling in a small town in Thuringia, where he lived in exile under the protection of a local duke.

When Weishaupt formed his humble reading group eight years earlier, he could little have predicted that the Illuminati would spread across the German-speaking world and then come crashing down amidst such a scandal.

“The Illuminati managed to recruit quite a large number of influential men – princes and their councillors, high-ranking bureaucrats, university professors and other educators, writers and intellectuals,” Reinhard Markner, historian at the University of Innsbruck, tells The Local.

A follower of the Enlightenment movement, which sought to create a society driven by science and reason rather than religion, Weishaupt constantly found his beliefs to be at odds with the university, controlled by the Jesuits, a hard-line Catholic order. This censorship led him to form a secret group to push against the Catholic authorities.

The Illuminati started out as a reading group in 1776, where Weishaupt’s best students would meet in secret so as not to attract the attention of the authorities. Here, they would have discussions amongst themselves about Enlightenment thinking, and students were required to write diaries about their thoughts, which were then further discussed in class.

This was the beginning of the Illuminati.

But even early on, the group developed grand plans.

“They even wrote a letter to Benjamin Franklin about it, but the project fell flat eventually because the War of Independence was still raging in the American South,” says Markner, describing their plans for an Enlightenment Utopia in America.

Weishaupt started recruiting from his current and former students in Bavaria, who in turn suggested other potential new members. After this he set about trying to change society by infiltrating senior positions of power.

Members were given code names like Spartacus (Weishaupt), Ajax, and Tiberius, and older members were required to help younger ones into positions of power, where they could go on to exert influence on society.

“It's difficult to say to what extent, if any, their actions were influenced by the fact that they had joined the Illuminati,” says Markner.

Weishaupt hit gold, however, when he recruited the well-connected Adolph Freiherr Knigge, a nobleman from Lower Saxony, who was code-named “Philo”, after the Alexandrian philosopher.

Already a member of the Freemasons, Knigge swelled the group’s membership to 2,000, even bringing in arguably Germany’s most loved writer: Johann Wolfgang von Goethe, code-named “Abaris”.

Many powerful princes, high-ranking officials, and professors were recruited. But many of them were also already enlightened or members of a much larger secret organisation, the Freemasons, who had similar aims to the Illuminati.

But along with new members, Knigge also brought a new hierarchical system, with many rituals and ceremonies that are associated with the Illuminati today. The ceremonies and hierarchy were meant to bring about a sense of achievement and structure for members.

“[During the ceremonies] the members were instructed in great detail how to better themselves, keep an eye on each other, share their knowledge, and further the goals of the Enlightenment,” says Markner.

As the order grew in size, many members felt like the Illuminati was losing its purpose. Weishaupt and Knigge were becoming too obsessed with their rituals, and had lost their focus on their original enlightenment goals.

A bigger problem for many was that they saw Weishaupt as out of his depth, and as someone who bullied younger members. This loss of confidence in the founder was then strengthened when it emerged that Weishaupt had fathered an illegitimate child and had considered an abortion.

The beginning of the end for the Illuminati started when Knigge and Weishaupt fell out. Weishaupt objected to large numbers of new, unproven members being allowed in, but Knigge wanted to have more recruits so as to increase the influence of the group. The fight ended with Knigge leaving the Illuminati and taking many members with him.

But the biggest blow for the organization was being implicated in a political scandal which planned to allow Austria to annex Bavaria, which Weishaupt thought would bring a more enlightened rule to the state.

The Illuminati came up against fierce opposition when the plot was discovered. The Order of the Golden and Rosy Cross – a group which was based around alchemy, spirituality, and mysticism, and which had connections to Bavarian authorities – led a campaign against the Illuminati and managed to persuade the King of Bavaria to outlaw the organisation.

Weishaupt was unmasked and fled Ingolstadt overnight, and the Illuminati was outlawed in 1785.

The damage was done and nobody wanted to be a part of the Illuminati anymore.

“The original Illuminati Order ceased to exist in early 1788. A new organisation was formed towards the end of the 19th century but it never really caught on.” Markner says.

Many have tried in the past to revive the Illuminati over the past 200 years, but most attempts only ever won over a few members and then died away.

Because the order was formed at a time when there was a craze for secret organisations, the group’s legacy is pretty unremarkable, explains Markner.

Nonetheless, it has become the fixation of many conspiracy theorists who claim that it is still in some way controlling the world.

The wild theories started just two years after the group collapsed, when many claimed the Illuminati had started the protests that led to the French Revolution. But Markner rubbishes these claims, saying “this allegation was clearly false, but has remained popular ever since.”

Historians have been able to document its decline, so the evidence that it stayed active even after its dissolution is very thin. But nevertheless, the Illuminati is still “the quintessential secret society plotting sinister conspiracies”, thanks to writers like Dan Brown who wrote the novel Angels and Demons, says the historian.

We may never know the full extent of the Illuminati’s influence, but there is no doubt that the cult status of this originally small Bavarian reading group will not die down anytime soon.