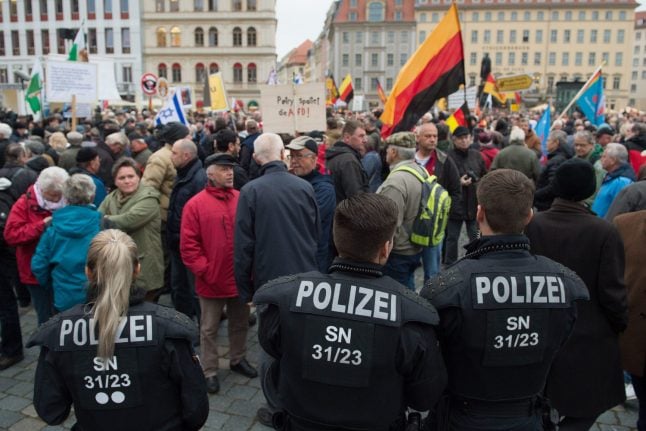 Pegida demonstrators in Dresden on Monday, some holding what appear to be AfD flags. Photo: DPA.

In a first, the Dresden branch of the AfD party and Pegida both held rallies on Monday in the same location one after the other in the Saxon capital where the anti-Islam movement was founded and regularly holds Monday demos.

But while the Pegida side called the demos a “double event”, the local AfD leadership insisted that the rallies were separate, according to Tag24. A Saxony regional leader of the AfD, Egbert Ermer, referred to “our friends from Pegida”, but he also spoke of a separation between the two groups, according to the Dresdener Neueste Nachrichten (DNN).

“Pegida is and remains a citizens' movement and we are a political party,” Ermer said. “We are going down one road, but on separate tracks.”

However, the leader of the Dresden Young Alternative youth branch of the AfD had a different interpretation of the rallies.

“Today we are indeed standing separate in the demo areas, but we are united in the cause.”

DNN reported that the AfD event kicked off immediately after the Pegida rally and “seamlessly” at the same location, though on a different stage just five metres away. And when the AfD finished after barely half an hour, Pegida once again took the stage.

DNN said that Monday's events appeared to be “the ultimate failure of Petry's strategy”.

The two groups hold similar beliefs: they’re harshly critical of who they consider to be political and media elites; they oppose Chancellor Angela Merkel’s liberal refugee policies; and they both voice concern about Islam's role in Germany. Pegida has previously overtly called for joint demos, using AfD logos. Pegida leader Lutz Bachmann – who did not appear on Monday – has also in the past often offered his stage to the AfD to use as a platform.

But while Petry and other party leaders have voiced sympathies with Pegida demonstrators, she has also continued to emphasize that her party does not collaborate with Pegida, and to distance the AfD from more radical elements of the anti-Islam group, including its leader Bachmann.

“Citizens who go out to the streets peacefully and democratically for their goals have our support. But we have always kept a distance from the Pegida leadership,” Petry said in an interview with Der Westen last year.

Bachmann temporarily stepped down in 2015 after photos emerged of him styled as Hitler. Last year Bachmann was also convicted of inciting hatred for a series of Facebook posts in which he called refugees “cattle” and “scum”.

Petry has also in recent months sought to distance the party from controversial elements internally, including Pegida-praiser and AfD politician Björn Höcke, whom Petry wants to kick out of the party for a speech he gave in Dresden criticizing Germany’s way of reflecting on its Nazi past.