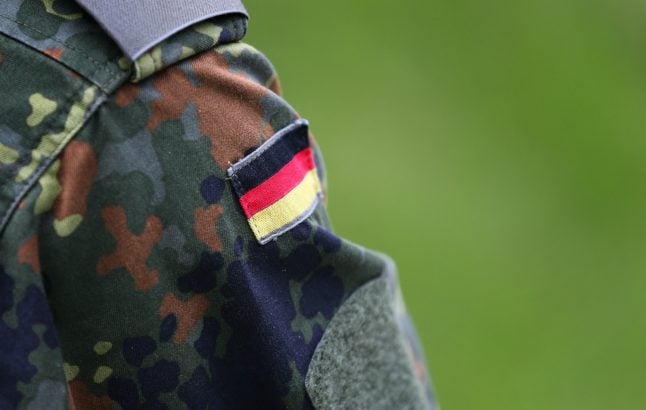 There is increasing evidence that a far-right terror cell has developed inside the Bundeswehr, according to a report on Tuesday in the Hannoversche Allgemeine Zeitung (HAZ).

The report claims that Defence Ministry investigators estimate a cell of up to five people conspired with Franco A., who was arrested last week on terror charges.

Franco A. was detained in the southern German city of Hammelburg on Wednesday on suspicion of planning a gun attack which he meant to blame on his alter-ego – a fictitious Damascus fruit seller.

Defence Ministry officials have since found Nazi memorabilia, swastikas and Nazi symbols at the Illkirch barracks at which Franco A. was stationed.

During an inspection of the barracks, senior military officials discovered the letters HH (Heil Hitler) engraved on walls, as well as Wehrmacht memorabilia hanging as decoration. Meanwhile an assault weapon was discovered with a swastika carved into it, indicating that far-right ideologies were tolerated in certain areas of the barracks.

Defence Minister Ursula von der Leyen announced on Tuesday that she had cancelled a trip to the USA in order to attend to the brewing scandal within her ministry.

On Sunday von der Leyen said that a failure of leadership in the army was partly to blame for the emergence of far-right extremism within the Bundeswehr ranks, a claim which the Armed Forces Association described as an “outrage” to soldiers.

Lieutenant Franco A. was first temporarily detained in February, by Austrian police at Vienna airport, after he tried to retrieve a loaded, unregistered handgun he had hidden in a toilet there days earlier.

This sparked an investigation in which a fingerprint check threw up an even bigger surprise: the suspect had in December 2015 created a false identity as a Syrian refugee.

The soldier, who has an Italian father and German mother, had pretended to be a Damascus fruit seller named “David Benjamin” – ostensibly a Catholic with Jewish roots who had fled the Isis militant group.

He had registered himself at a German refugee shelter and even launched a request for political asylum, said the prosecution statement. Incredibly, the request was accepted, even though the soldier speaks no Arabic.

He was allotted a place in the refugee home and from January 2016 onward received €400 a month in state assistance under this false identity.

The Bild daily has since reported that police found a “death list” compiled by the suspect, including left-wing anti-fascist activists.

Police last Wednesday also arrested a second German man, a 24-year-old student and alleged co-conspirator named by media as Mathias F, who was reportedly in possession of bullets, flares and other objects that breach weapons laws.