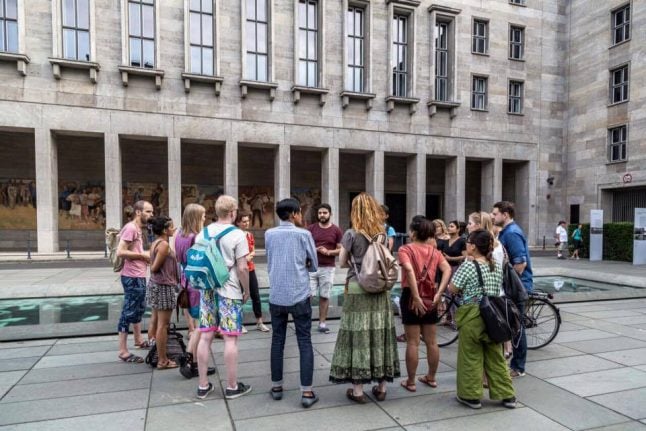 A tour through central Berlin on a recent, rainy Saturday afternoon guided its participants through some of Berlin’s most typical attractions: Checkpoint Charlie, Gendarmenmarkt, the shopping district around Friedrichstrasse.

But the stories told throughout were quite different than other tourist excursions. Along with Berlin’s Cold War history and Nazi past, the tour guides spoke of Syria’s own secret police, government repression, and natives fleeing for safer destinations – drawing parallels between the two nations.

The Refugee Voices Tours were launched less than a year ago by British transplant Lorna Cannon in the German capital, and have since expanded into Copenhagen and soon Paris. Herself a tour guide, Cannon told The Local that she had noticed that a lot of tourists in the city were asking about the situation with refugees in the country because of all the media coverage.

“I thought ‘this isn’t my story to tell. People should hear these stories’,” Cannon explains.

So she began to organize the tours with Syrian friends she already knew from working with refugees, and together they decided to link the similarities between German history and Syria’s ongoing civil war.

For example, the tour connects the communist East German government’s repression of the June 17th 1953 uprising during the Cold War to the 1982 Hama massacre. Both events involved the respective governments using military force to quash civilian revolts.

And in both cases, the governments downplayed or distorted what actually happened, East Germany blaming it on Western forces seeking to disrupt national stability, and the Syrian government often calling the massacre the “accidents of Hama”, tour guide Eyas Adi says.

“I think history is like a loop: what happened in Germany is happening in other countries,” observes Berliner Andreas along the tour route.

Another stop on the tour reveals the perhaps little known connection between Nazi Germany and Syria. An investigation by a French magazine earlier this year began to unravel the fate of Nazi war criminal Alois Brunner, who ended up in Syria after the Second World War. He is believed to have become an advisor to Syrian secret police, reportedly passing on Nazi interrogation methods.

The tour also uses Checkpoint Charlie to represent the German capital’s own internal division during the Cold War, until the country was ultimately reunified amid thousands of East Germans fleeing to the West.

“People escaping from East to West were similar to Syrian refugees now,” Adi says. “They wanted to have more opportunities for their children in a more free and stable country.”

The final stop on the tour is Gendarmenmarkt, a square featuring twin churches dating back to the early 1700s. One was built for the French Huguenot refugees who settled in the city due to persecution in France, and the other is a German Lutheran church.

“The message is that people can live together and integrate, even if they come from different religions or cultures,” Adi explains.

For some taking the tour, it’s the first time to truly put real faces to the news they see so often – and to understand how they ended up in Berlin.

“I wanted to hear from a Syrian person their point of view, besides just what the media says,” Brazilian Beatriz Oberlaender, who recently moved to Berlin herself, tells The Local.

Adi came to Germany about a year ago after he said he tried to stay in Damascus for as long as possible. A medical student there, he had worked in social and psychological services with victims of the conflict. But when he could no longer avoid serving his legally obligated military service for a regime he criticizes, Adi decided to leave, and was granted asylum last November.

“If the situation were better, I think I would go back,” he says.

For the guides, the tours are also a way to maintain a connection to their homeland, over 3,000 kilometres away.

“The best part is seeing that there are still some people who care enough to listen and understand what's happening in Syria, and want to show their support,” says tour guide Mohamad.

“It means to me a lot because it's giving me the sense that I'm doing something for my country, even if it’s just to bring awareness to what's happening there so people can understand it.”