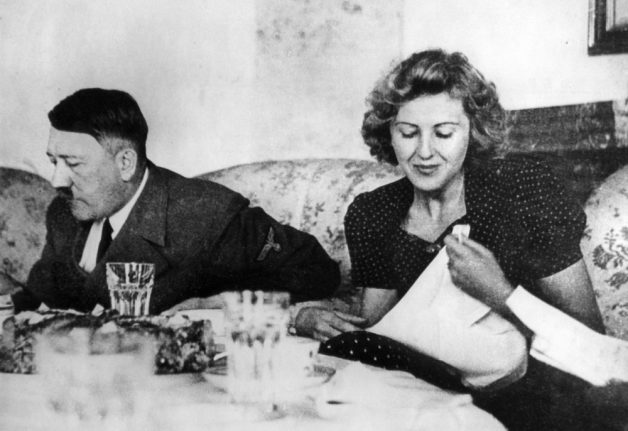 On 30th April 1945, Hitler and Eva Braun woke up just after 6am in their bunker in central Berlin. At midday they had their lunch of spaghetti and tomato sauce. During the meal, propaganda minister Joseph Goebbels urged the pair to flee the city, but Hitler declined. This would be their final meal.

Shortly after 3pm, Hitler and Braun said their final goodbyes to friends and family, and made their way into the dining room.

At 3.28pm, Braun was dead after poisoning herself, and at 3.30pm Hitler shot himself in the temple. According to the dictator's wishes, the two bodies were carried through the bunker and burned in the gardens of the Reich Chancellery. Later that evening, the Russian army hoisted their flag on top of the Reichstag (German parliament).

Two days earlier, the couple had tied the knot, and Braun had become Frau Hitler. The woman 23 years her husband's junior had finally gotten her wish – but only after he kept her in the shadows for years.

Braun was born in 1912 into a troubled family in Munich. During the turbulent years after the First World War, her parents divorced and then remarried, probably for financial reasons. But overall the family lived with very little money.

At the age of 17, Braun took a job in the studios of Nazi photographer Heinrich Hoffmann in Munich, where she occasionally also modelled in front of the camera. It was in that studio that she first met Hitler, at that time a radical, fringe politician.

Little is know about when the pair became intimate, but there are accounts that the teenage Braun stuffed her blouse with tissues to try to get Hitler's attention.

During the early years of their relationship, Braun twice attempted suicide. In 1932 she shot herself in the chest, while in 1935 she took an overdose of pills. Both attempts seem to have been a protest that Hitler wasn’t paying enough attention to her, and on both occasions it seems to have worked. In 1935 Hitler moved Braun and her sister Margarete into an apartment in Munich.

Braun’s relationship with Hitler was very complicated. There has been speculation that it was purely platonic; they even slept in adjoining bedrooms. Staff at Hitler’s alpine retreat claimed after the war to have searched the bedsheets after the pair had left, but found nothing that led them to think that they had spent the night together.

According to Berlin historian Heike Görtemaker, there is little credence to this kind of story. She emphasizes that there is little that is know about Hitler and Braun's life together due to the fact that the Nazi leader ordered all his private documents to be destroyed in 1945.

But it is clear that Hitler preferred it that their relationship was kept far from the public eye, despite the fact that she was in love with him, Görtemaker argues.

The dictator believed that a public relationship would have been a disaster for his image.

“Many women find me appealing because I am unmarried,” he reportedly said. “It's the same thing with a film actor: When he marries, he loses a certain something among the women who worship him, and they no longer idolize him quite as much anymore.”

Thus, Braun was hidden away from view, so that only a few people in Hitler’s inner circle knew about their relationship.

In fact, when they were together, Hitler treated Braun bizarrely. When guests came to visit his Bavarian mountain retreat, Braun had to hide. When she was occasionally allowed to emerge in front of the guests, Hitler would treat her like his mistress and in plain view pass her envelopes filled with money, according to a report in Die Welt.

Being Hitler's lover meant a life of luxury – she spent much of the war in Hitler's Berghof (mountain retreat) in Berchtesgaden.

According to some accounts, she had vices – such as drinking and smoking – which Hitler detested.

And even in the dying days of the war, she seemed partial to success. On April 20th 1945, Hitler’s birthday, she took party guests up into the destroyed apartments of the Reich Chancellery and had a champagne party.

But while common cliches depict Braun as someone in thrall to luxury and wealth, Görtemaker says there was more to her than that.

“The current cliches – that she was dumb, self-absorbed and ignorant – are completely exaggerated. She also had a function at the Berghof: she worked for her ex-boss Hoffmann as a photographer and sold him propaganda photos,” she told Die Welt in 2015.

“She played her part in conveying an image of the 'Führer' to the public. In no way was she a dumb child.”

Despite spending the war in safety in the Alps, Braun chose to travel to Berlin to be with Hitler as it became clear that Germany would lose.

“Her decision to travel to a destroyed Berlin and to take her life along with Hitler at the age of 33, shows a deep conviction, determination and hardness. The superficiality which is often ascribed to her is false. If she had stayed in Munich, she would have had a good life,” says Görtemaker.

But according to a cousin of Braun's, her relationship was marked by misery and committing suicide was the only way she saw to win back respect.

Her cousin Gertraud Weisker told Spiegel years later that the relationship had caused a fracture within her family. She only stayed in contact with her younger sister Margarete, who also married a senior Nazi.

“She was desperately unhappy. That's why she tried to take her life twice,” Weisker said.

“She was in a relationship which could only be justified through marriage and death together.”