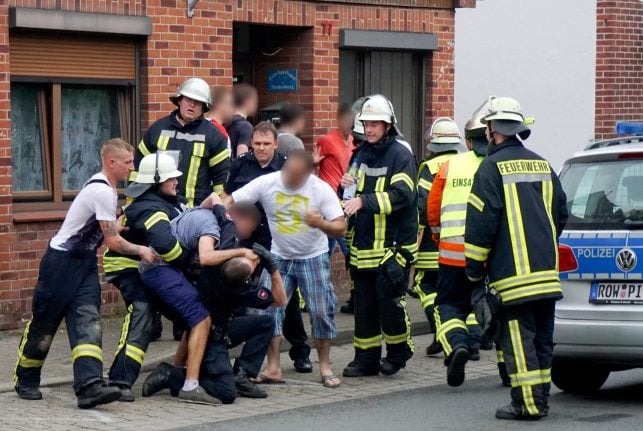 The three brothers at the scene in Bremervörde. Photo: DPA.

A court in Bremervörde, Lower Saxony on Thursday sentenced the 27-year-old man to four months in prison, without parole, for assault and resisting police officers. His two brothers were fined €100 and €150 each.

The three had been accused of hindering police operations after a deadly collision in July 2015. A car had crashed into an ice cream shop, killing a two-year-old boy and a 65-year-old man. Several others were seriously injured.

After the crash, numerous bystanders gathered to see what had happened. The case was dubbed the “rubbernecking trial” in the media because the 27-year-old had been accused of stepping into the restricted crash scene area and recording what happened with his cell phone.

It was never proven, however, that he actually took photos or videos. The phone was not seized on the day of the accident, and thus the court could not be certain of the claims.

When the 27-year-old was ordered to leave, he got into a fight with police – including putting officers into headlocks – injuring two officers and also attacking a firefighter.

The defendants had argued that they were not rubbernecking, but rather that the 27-year-old knew the owner of the ice cream shop – who was injured – and wanted to see if he was okay. Their attorneys further argued that it had never been proven whether the 27-year-old actually took photos or videos.

“It was not a rubbernecking case,” said defence attorney Lorenz Hünnemeyer, criticizing what he said was a media and political campaign against the brothers.

After the crash, the state of Lower Saxony called for a law to punish rubbernecking, which has yet to be discussed by the Bundestag (German parliament).