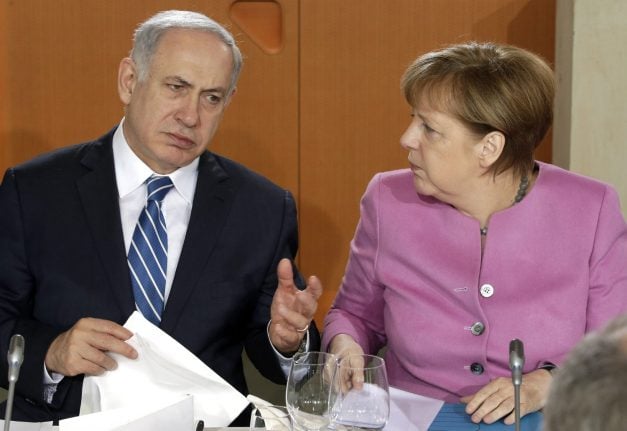 What was once “unthinkable” has become real – the gild on the ties between Germany and Israel may be fading.

Due to its historical responsibility as the perpetrator of the Holocaust that killed six million Jews, Germany has not only been Israel's staunch ally but has also shied away from openly criticising the Jewish state.

But Netanyahu – Israel's most right-wing leader to date – has irked Berlin by pressing on with settlement building in the Palestinian territories despite repeated warnings from world powers that it would harm any prospects of peace.

On Tuesday, the tensions ratcheted up a notch with Netanyahu scrapping at the last minute a planned meeting with Sigmar Gabriel because the German foreign minister refused to cancel talks with Israeli rights groups.

Gabriel had sought to minimise the damage, saying it was “not a catastrophe”.

But he also stressed that he wanted “to say openly that I think we should not become the pawn of Israel's domestic politics.”

Public opinion in Germany was firmly on the foreign minister's side, with Spiegel weekly noting that “Netanyahu's government has pushed the historically imperative special treatment to its limits.”

“Certainly, Israel can never be just another country for Germany. Special consideration for the past is required, and, until today, also special diplomatic sensitivity.

“But historical guilt can not lead Germany to accept an Israeli government moving away from certain values that we have always shared.”

Treated as a joke

Berlin has been troubled for months by Israel's settlement building programme and attempts to crack down on critical NGOs.

Rather than air its unhappiness in the open, Merkel's government had sought previously to express concerns behind the scenes.

“Merkel has often repeated during bilateral government consultations and during interviews with Netanyahu that despite the solidarity and friendship between the two countries, there is discontent about the decisions concerning new settlements in Palestinian territories,” said Volker Beck, a Green party lawmaker who heads the Germany-Israel friendship group.

But right after the Knesset approved a new law legalising dozens of Jewish settler outposts in the occupied West Bank, the German foreign ministry openly voiced doubts for the first time in January about whether Netanyahu intended to respect his pledge for a two-state solution.

A month later, Merkel's government cancelled an annual consultation with Israel which had been planned for May in Jerusalem.

Ostensibly, the reason was a diary problem yet the message was clear.

“Merkel has now changed her tone because the Israeli government has taken the reservations expressed by Germany as a joke,” said Moshe Zimmermann, a geopolitical analyst at the Hebrew University of Jerusalem.

In the immediate aftermath of World War II, the young Jewish state had boycotted then West Germany, until a deal in 1952 offering reparations to Israel.

Both sides – and subsequently a reunified Germany – have since built up a close relationship.

In a sign of their special ties, the two governments had met annually for bilateral talks.

And Merkel has repeatedly said that “the security and right of the state of Israel to exist is a fundamental tenet for Germany”.