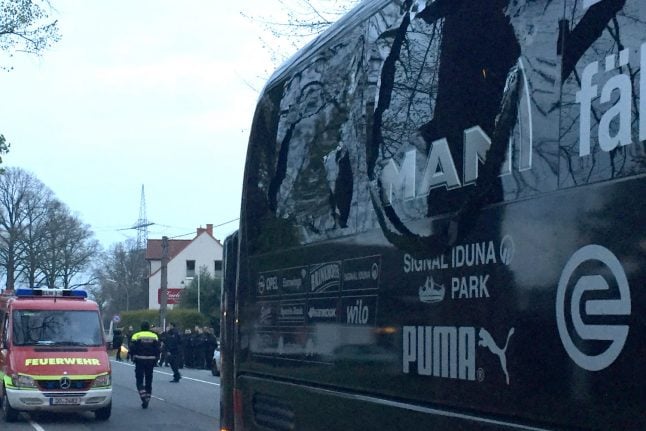 The damaged bus after the explosion. Photo: DPA.

Bartra was taken to hospital and the quarter-final first-leg match was postponed until Wednesday because of the attack. Other Dortmund players were said to be “shocked” but with no injuries.

Follow our live blog here for the latest updates

The bus had set off from the team hotel for the Borussia stadium about 12 kilometres (7.5 miles) away when “three explosive charges detonated,” said a police spokesman, Gunnar Wortmann.

The explosions came shortly after 7.00pm on the Wittbräuckerstrasse road. The bus windows were shattered, police and team officials said.

The club said other players were safe and there was no danger inside the Signal Iduna Park stadium.

“There has been an attack with explosives on the team bus,” said Watzke. “The whole team is in a state of shock, you can't get pictures like that out of your head.

“I hope the team will be in a position to be able to compete tomorrow on the pitch.

“In a crisis situation like this, Borussia pulls together.”

The announcement that the game was postponed until Wednesday was only made to the stunned stadium about 15 minutes before the game was due to start.

UEFA said the match will now be played on Wednesday at 6.45pm.

Dortmund relayed a copy of its Twitter announcement of the explosions inside the stadium to inform fans of events.

The club urged fans in the stadium not to panic.

“We recommend to stay in the stadium and to keep calm to ensure an orderly departure,” said a Dortmund Twitter statement.

Germany has been on a high alert since last December's attack in Berlin, when a Tunisian national hijacked a truck and rammed it into a crowd, killing 12 people.

The German national team, which included some Dortmund players, was involved in the November 13th 2015 Paris attacks which left about 130 dead.

The German team spent the night at the Stade de France, which was one of the attacks of the Islamist militants. Their match against France had gone ahead despite the attacks by suicide bombers. They flew home the next morning.

Four days later, a Germany-Netherlands friendly in Hanover was called off at short notice because of fears of an attack.

Bartra's former team Barcelona quickly expressed sympathy to the player and the German club. “All of our support to @MarcBartra, @BVB and their fans,” said a Barcelona Twitter statement.