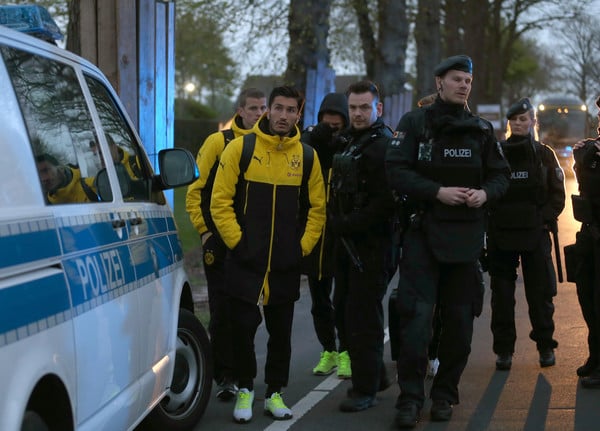 Borussia Dortmund players, including Pierre-Emerick Aubameyang, stand outside a hotel with police after three devices exploded near their team bus. Photo: DPA

Police are still investigating what they believe to be a targeted attack against the Borussia Dortmund team on Tuesday after three explosions went off near the team's bus on the way to a match.

Spanish defender Marc Bartra was wounded in the blasts and taken to hospital where he had to undergo surgery after sustaining a broken bone in his wrist and other injuries.

The Champions League game against AS Monaco has been postponed until Wednesday, and officials promise a major police presence.

The Dortmund bus attack: what we know and what we don't

And see below for our live coverage of the events.

11.45pm – Other suspicious item found was not serious explosive.

Officials said at a press conference that a suspicious, explosive device-like object was found after the initial blasts, but that it was not serious and had not detonated.

Officials revealed at a press conference that Bartra was undergoing surgery after sustaining a broken bone in his right wrist. He also suffered other injuries from “foreign bodies” in his arm.

A representative for the local prosecutors office said they were “intensively investigating” a written note found near the scene of the explosions. The note reportedly claims responsibility for the blasts.

Police president Gregor Lange said during a press conference that officials believe the explosions were a “targeted attack” against the team.

Lange also said that police would have a strong presence at the game scheduled for Wednesday. When asked about the possible motive behind the attack, Lange said they have not ruled out any possible scenario.

11.01pm – Stay tuned for updates from a police press conference, which is just about to begin.

Dortmund meanwhile announced there would be no tours of their popular stadium on Wednesday.

We’re sorry we have to cancel all stadium tours for Wednesday, 12 April. Thanks for your understanding. More info: https://t.co/BlGAqtvYpc pic.twitter.com/IAEiJRxjBh

Security sources told DPA that so far there have been no indications that the explosions were terror related, but the investigation continues.

Swiss goalkeeper Roman Bürki described for a publication from Switzerland the moment the explosions went off.

“I was sitting in the very back row next to Marc Bartra, who was hit by the fragments of the busted rear window,” Bürki told Blick.

“The bus turned onto the main road when there was a huge bang – an absolute explosion.

Then the players ducked down and laid down on the floor.

“We didn't know if something more would happen.”

10.20pm – Police say they have found a suspicious object.

Police said they had found a suspicious object near the site of the explosions. They did not reveal any further details.

“According to initial findings, police assume that it was an attack with serious explosive devices,” investigators said.

They further noted that the devices could have been hidden in a hedge within the vicinity of a parking lot. The background of the potential attack is still being investigated.

9.58pm – Initial police findings suggest the explosives were hidden in a hedge.

“That seems to be the case,” a police spokesperson said on Tuesday evening.

Police had no further details on who had planted the devices or what kind of explosives were used.

9.53pm – News agency AFP has some more details as well as quotes from Borussia's CEO on the “shock” felt by the players.

The bus had set off from the team hotel for the Borussia stadium about 12 kilometres (7.5 miles) away when “three explosive charges detonated,” said a police spokesman, Gunnar Wortmann.

The explosions came shortly after 7.00pm on Wittbräuckerstrasse.

The bus windows were shattered, police and team officials said. Marc Bartra, pictured here shouting at his teammates in a Bundesliga match against Schalke 04 on April 1st 2017. Photo: DPA

The club said other players were safe and there was no danger inside the Signal Iduna Park stadium.

“There has been an attack with explosives on the team bus,” said Watzke.

“The whole team is in a state of shock, you can't get pictures like that out of your head.

“I hope the team will be in a position to be able to compete tomorrow on the pitch.

“In a crisis situation like this, Borussia pulls together.”

The announcement that the game was postponed until Wednesday was only made
to the stunned 80,000 capacity stadium about 15 minutes before the game was due to start.

Bartra's former team Barcelona quickly expressed sympathy to the player and the German club. “All of our support to @MarcBartra, @BVB and their fans,” said a Barcelona Twitter statement.

9.35pm – Cause of explosions still unclear.

What exactly caused the explosions as well as how and where they went off is still not clear. Police have only said that they occurred in the vicinity of the bus.

“It is not yet possible to say what the explosion was, or exactly where something exploded,” police said.

The area around the bus was blocked off afterwards, and police used a drone to search for any potential other explosives.

9.28pm – Pictures have begun emerging of the Borussia Dortmund team bus and players. The Borussia Dortmund team bus parked on a street with a damaged window pane. Photo: DPA Fans will still be able to use their tickets for Tuesday's cancelled game on Wednesday but many may now be stranded, particularly Monaco's travelling supporters. .

Borussia Dortmund wrote on Twitter that such fans can search for the hashtag #bedforawayfans.

9.10pm – Marc Bartra injured on hand and arm, but not 'life-threatening'.

Dortmund team CEO Hans-Joachim Watzke said in a Facebook Live stream on the team's website that the devices had somehow seemingly been hidden, and that Bartra sustained hand and arm injuries. But the player is certainly not in any “life-threatening” condition, he added.

Police have been searching the area where the explosions took place using drones. Officials are investigating whether there could be further explosive devices.

Police tweeted appreciation to fans of Borussia Dortmund and AS Monaco for leaving the stadium peacefully after it was announced that the match would be postponed.

“Many thanks for the thus far calm and level-headed departure from the stadium!” local police wrote

Police said three devices detonated shortly after the team bus for Borussia Dortmund departed from their hotel to the stadium for a Champions League quarter-final clash against AS Monaco on Tuesday.

The explosions damaged the bus in two places, and left player Marc Bartra injured. The team confirmed on Twitter that he had been brought to hospital, and wished him a “good and fast recovery”.

The father of fellow player Mikel Merino told Spanish sport news programme El Larguero that his son was with Bartra in an ambulance and that “he is well”.

“There is now no reason to panic here,” a stadium spokesperson told fans, calling what happened a “serious incident”.

The other players are reportedly now safe and that police reported that there is currently no evidence of any danger to stadium visitors. Police also warned against “rumours and speculation”.

The game has been postponed until Wednesday at 6.45pm

#bvbasm has just been postponed until Wednesday, 12 April 1845 CET. Tickets remain valid. Thanks to everyone involved in the decision.