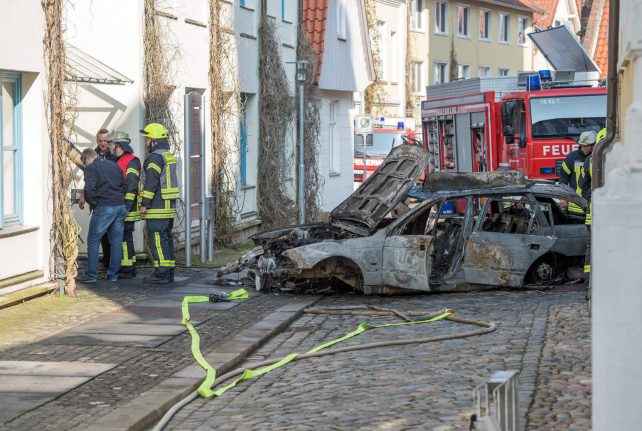 The aftermath of the reportedly intentionally collision. Photo: DPA.

The local 47-year-old man smashed his car into the town hall of Verden, Lower Saxony, at 8am on Sunday morning, sparking a fire and causing hundreds of thousands of euros in damage, possibly up to €1 million.

No one was injured in the fire, but the damage could have been much worse, police said: the man had an 11-kilo bottle of propane gas in his car, which did not explode though the gas did leak out. The driver himself pointed out the bottle to police afterwards.

“If the gas bottle had exploded, the damage would most certainly have been greater,” said police spokesperson Helge Cassens.

Authorities have ruled out terror as a motive and said that the man probably attacked the town hall out of personal reasons, perhaps due to frustration with the city administration. The driver was arrested by police without resistance.

“Presumably there was a conflict with the authorities,” said Helge Cassens.

“With the backdrop of the events over the last few days, we have ruled out a terror attack,” added fellow police spokesman Marcus Neumann, referring to the truck attack in Stockholm on Friday that killed four people.

The Verden driver was previously known to police for some minor offenses, and according to Cassens had not been known as a member of any extremist groups.

The driver rammed into the closed lobby doors of the town hall, with the flames from the resulting fire then spreading to adjacent rooms on the ground floor. The offices for security and regulations were particularly impacted, as well as offices for building supervision and sewage disposal.

Fire fighters worked to extinguish the blaze for over an hour and a half.

As a result of the fire, the town hall will be working with diminished capabilities as the building must be kept closed off. It is not yet clear when it will be open again.

A spokesperson for the Lower Saxony City and Community Association said that ultimately no one can ever fully protect themselves from such random attacks.

“If we do it nevertheless, we would get a state where nobody would want to live,” said spokesman Thorsten Bullerdiek.

“That’s why it only helps to handle it calmly, and with a level head.”

Germany has been particularly wary of vehicle attacks since Isis sympathizers have used the tactic in a number of European attacks, including at a Berlin Christmas market last year, and most recently in Stockholm on Friday.

Fears were also raised when a student drove a hire car into a group of pedestrians in Heidelberg in February, killing one person. But local police shut down rumours of terrorism, and said the suspected perpetrator was a German man. Authorities are currently examining whether he suffered from mental illness.