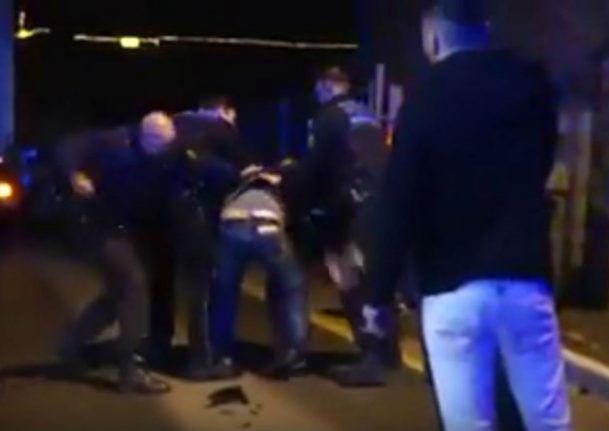 Prosecutors confirmed on Wednesday that two of the officers had already been taken off the beat and had been assigned desk jobs while the investigation takes place.

The video was shot at the scene of a traffic accident on Willy Brandt Strasse on February 19th, prosecutors confirmed. In the footage, police officers can be heard asking a man who was involved in the accident to put out his cigarette.

When the man refuses, the officers pull him to the ground. Another joins in from behind and begins hammering his baton against the man’s backside. A further officer, who had pinned the man down around his neck, can then be seen punching him repeatedly in the area of his head.

The attack is shown at about 3:18 minutes into the following video:

A police spokesperson has said that the video has left them “speechless”, according to the Stuttgarter Zeitung.

The original police report, published in February 19th, claimed that “a verbal argument led to an assault on the part of a 35-year-old man on a 28-year-old police officer.”

“This resulted in the officer hitting his head on the pavement. Luckily, he was able to leave the hospital before midday after only suffering minor injuries,” the report states.

The report also stated that the 35-year-old was under investigation for resisting a police officer.