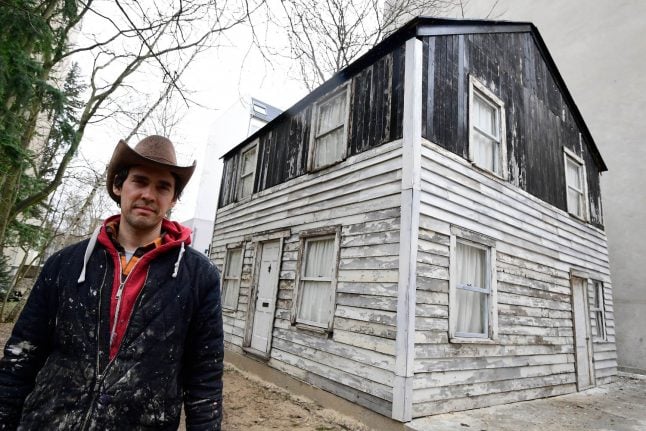 US artist Ryan Mendoza, who is based in the German capital, helped rescue the dilapidated two-storey structure from the wrecking ball and rebuilt it board by board in his garden. This week he will invite the public to have a look.

Mendoza, 45, says the house's odyssey holds up a mirror to two societies: his bitterly divided homeland grappling with the rise of President Donald Trump, and Germany, where more than a million people fleeing war and misery have sought asylum in the last two years.

“By disregarding this house, the United States has shown a disregard for civil rights,” Mendoza said, as he gave AFP a preview of the reconstructed clapboard structure in the city's ethnically diverse Wedding district.

“Civil rights are not just important for black people but also for white people who want to differentiate themselves from their racist forefathers. The Germans completely understand what this house has to say.”

Having lived in Europe for more than two decades, Mendoza said Berlin's earnest reckoning with its own dark history as well as a mood of “love and tolerance” made it the right haven for the house.

Parks, an African-American seamstress, refused to give up her bus seat to a white man in Montgomery, Alabama on December 1st 1955, triggering a wave of ultimately successful protests against racial segregation.

She became a hero of the international civil rights movement but relentless death threats in the South forced her to escape to Detroit, then a booming industrial city and a symbol of the American Dream.

Mendoza said the modest three-bedroom home at 2672 South Deacon Street housed 17 people – her brother's family – at the time Parks lived there, between 1957 and 1959. She never moved back to Alabama, and died in Detroit in 2005 at the age of 92.

Battered by floods and break-ins, the blighted house eventually ended up on the city's long demolition list.

Parks' niece Rhea McCauley, a retired artist, bought it back for $500 but was unable to raise the funds to restore it.

Enter Mendoza and his wife Fabia, who had already transposed one Detroit house to Europe as part of an art project probing themes of rootlessness and displacement. They said they have become the “foster parents” of the Parks house.

McCauley, 69, said she is grateful to the Mendozas and is sure Parks herself would have approved of the move to Berlin.

“I love them for what they're doing for my aunt. Not very many people would have stepped up to the plate and, trust me, nobody did here in the United States,” she told AFP by telephone from Michigan.

'Not ready for Rosa'

Mendoza said he used the proceeds of paintings he sold to foot the $33,000-bill to deconstruct and transport the house.

Getting it across the Atlantic was a “very dangerous project”, he said.

“The chimney was listing and the back wall was very damaged and the floors were sagging,” he said.

Mendoza took the house apart over 18 days last August, packed it in shipping containers and gradually pieced it back together on a foundation he poured between his contemporary home and his studio.

He will showcase it for guests on Saturday, and again on the city's Gallery Weekend art festival April 28th-30th.

McCauley will fly to Germany for the open house and the premiere of a documentary about the project by Fabia, a Berlin native.

Visitors will not be able to enter the house but Mendoza will illuminate it from the inside and play 1950s-era music and news clips that Parks might have heard.

He has consciously left the traces of its long neglect, including its peeling paint. He said he is holding the house “hostage” until it can return to its rightful place in Detroit, with its “dignity restored”.

Mendoza has sought help from public and private US institutions as well as former first lady Michelle Obama, thus far without success.

“Here we have a house that is priceless, worth more than any waterfront villa that you can imagine,” Mendoza said.

“I would like to see it here for as short a time as possible. I totally love this house but this is not my house. I'm trying to give back as much as possible.”

However McCauley, who said she is alarmed and angered by the direction her country is taking under Trump, prefers the house stay in Berlin for a bit longer.

“The United States itself with the politicking and the disregard for human life – they're not ready for Auntie Rosa. I would have to wait until this country grows up.”