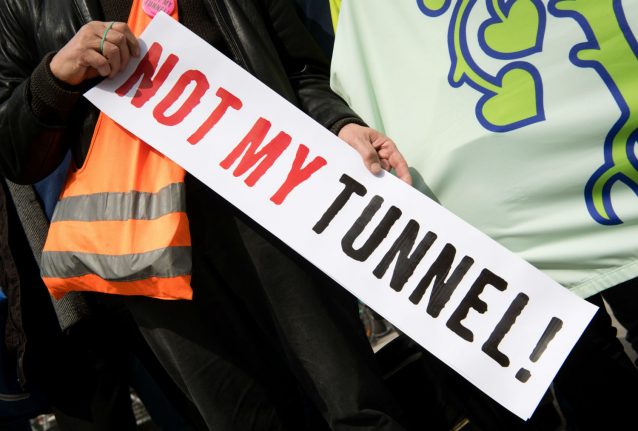 A demonstrator against the tunnel build. Photo: DPA

Whatever Berlin can do Munich can do better, or so the Bavarian capital likes to tell itself.

And it certainly has the potential to be true in terms of messing up a huge public infrastructure project.

Berlin’s snazzy new international airport’s opening has been delayed since 2011 – and projected costs have doubled to over €5 billion.

The capital city has promised that the air hub will be open in spring 2018. But the recent sacking of the building site’s boss has again made international news for all the wrong reasons.

A ten-year building project cutting under the entire city centre and projected to cost close to €4 billion will get under way on Wednesday – what could possibly go wrong?

The case for adding a new S-Bahn tunnel to the existing one is clear. The city currently has one tunnel which travels under a section of the inner city between Rosenheimer Platz and Hauptbahnhof (the central station), and which all suburban trains are funnelled into.

If this breaks down, hundreds of thousands of commuters who travel daily between the suburbs and the city centre would be stuck.

The current tunnel was built in 1972 when around 220,000 passengers used the Munich S-Bahn every day. But there are now around 840,000 on the strained suburban services, the Süddeutsche Zeitung (SZ) reports.

For Munich mayor Dieter Reiter, it was clear that the time to act was now.

“The number of days when we hear ‘disruption on the main line’ has become unbearable for me,” Reiter told Bayerische Rundfunk (BR). “Therefore the only correct decision to make was to say, ‘we’re building this tunnel now'.”

When it opens in 2026, the new tunnel will travel a very similar route to the old one, except that it will be longer, passing under the belly of the city for 10 kilometres from Donnersbergerbrücke to Ostbahnhof.

It will also only stop in three stations: one 41 metres below the Hauptbahnhof, a new station at Marienhof, and one 36 metres under Ostbahnhof.

The Hauptbahnhof station is particularly controversial, as the plans entail pulling down the Starnberger Bahnhof section, which is a building listed as protected.

The project will pose considerable challenges to engineers, according to the SZ, due to the depth at which much of the building will take place.

The sheer amount of earth that will need to be transported out will also place a huge strain on the city's road system. At the most intensive stage, a truck loaded with earth will drive through the inner city every ten minutes.

And business owners are already complaining about the effect the project will have on business, as building sites at the new stations will be bang in the middle of three of the city's most busy shopping areas.

In a manner that certainly isn't unheard of in large infrastructure projects in Germany, costs are already way above original projections.

In 2001, costs were calculated at €1.4 billion, have now more than doubled to €3.2 billion. With “potential risks” calculated in, that sum rises to €3.84 billion – making it the most expensive infrastructure project ever undertaken in Bavaria.

Stuttgart's new inner-city rail system is another example of an infrastructure project that has been years in the planning with costs piling up. In a similar fashion, planners there decided to pull down part of the listed old central station and build an underground alternative at exorbitant expense to the public purse.

The Stuttgart 21 project is currently projected to cost €10 billion (initial projections put it at €2.5 billion) and the opening has been delayed to 2021. It also faced fierce demonstrations from the public, with tens of thousands protesting at the planned site in 2010.

Munich's new tunnel has not faced anything like the resistance seen in Baden-Württemberg, mainly due to the fact that most people recognize some sort of solution is necessary, the SZ reports.

But it is now 16 years since the city gave the green light to construction on the second tunnel. Forty legal complaints, not all of which have been resolved, were launched against the project, holding it up. Then the conservative Christian Socialists (CSU) appealed in 2008 for an overground option to be considered.

The proposed alternative was to direct the S-Bahn traffic through an overground ring, much like Berlin’s Ringbahn, which encircles the city centre.

One city resident involved in a protest against the build told BR that “there are cheaper solutions”.

“Circumventing the city centre is a better solution. They have it in Berlin and Hamburg, only in Munich it doesn’t exist,” the man said.

“Clearly there are people who are making millions who want to do to Munich what they have done elsewhere,” the man added, obscurely.

So now the race is on. Which of Berlin, Stuttgart or Munich will open their over-budget project first?