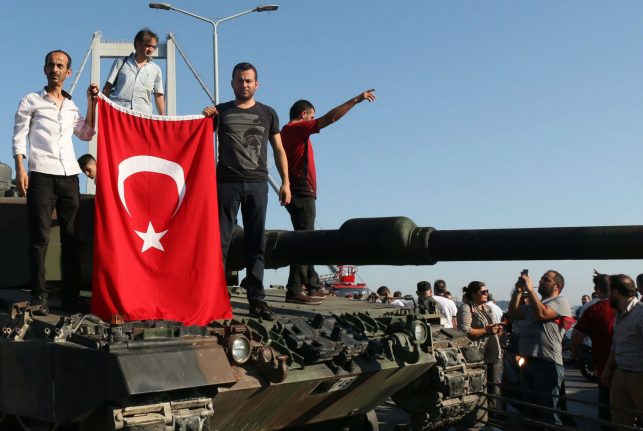 Supporters of the Turkish government after an attempted coup in July. Photo: DPA

Germany's interior ministry said 151 of the asylum applications came from Turks holding diplomatic passports while the other 111 were from people with passports issued to other government employees and their dependants.

The ministry did not specify how many of the requests came from Turkish military personnel stationed at NATO bases.

“The asylum applications will be treated on a case-by-case basis … and decided according to the law,” a ministry spokeswoman said during a regular press conference.

The wave of requests for safe haven follows last July's failed coup against President Recep Tayyip Erdogan and a subsequent crackdown, which has seen more than 100,000 people arrested or dismissed from their posts over alleged links to the plotters or to Kurdish militants.

Berlin has emerged as a strident critic of Ankara's crackdown, voicing concerns over civil liberties in the country.

Turkey, meanwhile, has accused Germany and other EU countries of “Nazi” practices for banning campaign events by its ministers in the lead-up to an April 16th referendum campaign on extending the president's power.

Relations have also been troubled by Turkey's arrest seven weeks ago of German-Turkish journalist Deniz Yucel, a correspondent for the German newspaper Die Welt, charged with spreading terrorist propaganda and inciting hatred.

Foreign Minister Sigmar Gabriel said Monday he had now been promised by Ankara that the German consul general would be allowed to visit Yucel, 43, for the first time on Tuesday.

“This morning, Turkey officially confirmed by verbal note that tomorrow we will finally get access to Deniz Yucel so that we can confirm his well-being after his difficult times in detention,” said Gabriel in a statement.