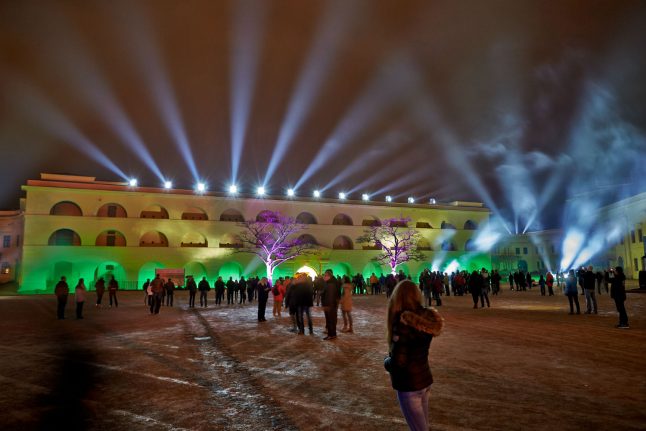 Two ladies in dirndls in one of the fetival's two beer tents. Photo: DPA

The spring festival, sometimes called 'little Oktoberfest', could not be more jam-packed with events and activities.

80 showmen, a flea market, fairground rides and two beer tents will descend on the Theresienweise, the location of Oktoberfest in Munich.

Much like Oktoberfest, there will be a parade of breweries and live music, but unlike the autumnal celebration there will also be a firework display on April 28th, and screenings of football matches as FC Bayern play in the German Football Asscociation Cup (DFB Cup) and the Champions League. A 2011 advertisement for the festival. Photo: DPA

This week-long festival celebrates films that were partly if not wholly filmed in and around Berlin. Said to be the the third biggest film festival in the capital, it has taken place since 2004.

Documentary films, short films and feature films are shown in different cinemas in the capital before their official release. Over 80 films are to be shown this year, and the film crew and casts will attend the showings.

The festival shows contributions from both famous directors and younger talents, and also includes the distribution of awards, workshops, panel discussions and film parties. Taking place next to the Dutzendteich lake, the event offers dance, traditional food and music, fairground rides and a concert stage.

Since the event falls around Easter this year, there will be egg painting and Easter egg hunts to take part in too.

4. The Swabians: Between the Myth and the Brand,  Stuttgart, April 1st – 23rd

The exhibition poses the questions 'where is Swabia?', 'who is a Swabe?' and 'what is Swabian?' . Photo: DPA

Now in it's final month, this is your last chance to catch this exhibit, which is centred on the ancient German region of Swabia, nowadays split between Bavaria and Baden-Württemberg.

To answer the question who or what is Swabian, almost 2,000 years of history, Swabian art and the Swabian dialect are analysed through 300 objects on show.

The exhibition also seeks to challenge the Swabian stereotypes of diligence, thrift and cleanliness. Easter decorations are hung from trees in Lübeck. Photo: DPA

We've heard of an Australian Christmas on the beach, but what about celebrating Easter at the shore?  This family orientated event means you can do just that.

The four-day programme includes  musical performances, a warming bonfire, painting activities, Easter-themed storytelling, and of course a visit from the Easter bunny himself.

Certainly a unique way to spend the Easter weekend! If enjoying wine and food sounds like your kind of activity, then head to Würzburg.

The Bürgerspital, a 300-acre wine estate, is holding a two-day wine festival to welcome in the spring.

One of the oldest wine estates in Germany, it is a member of the Association of German Top-Quality Wine Estates (VDP), a group of Germany's elite wine producers, so quality is assured! The Ehrenbreitstein fortress in Koblenz lit up with coloured lights. Photo: DPA

Prepare to be dazzled by illuminations as the clifftop Ehrenbreitstein fortress in Koblenz is colourfully lit up for seven evenings.

Taking place between nightfall and midnight, the fortress, which overlooks the river Rhine, will exhibit eight light installations, which make use of shadow and sound as you admire the courtyard of the fortress and explore its secret passageways.

The final evening also promises a firework display, which you can feast your eyes on at 9.30 pm.