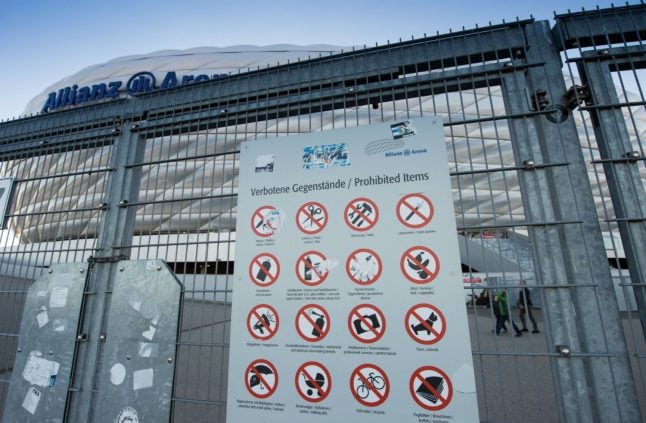 Bayern Munich scored three goals when they beat Manchester United in the quarter final of the Champions League in April 2014.

Fritz Rettensteiner had a ticket for the match, but he never got to see the victory, the Süddeutsche Zeitung (SZ) reports.

Just after he had passed through the turnstile at the Allianz Arena, a ticketless Manchester United fan crashed into him after jumping the barrier.

Rettensteiner fractured his kneecap and elbow and lost a tooth in the fall. He had to be treated in hospital, and the injuries were so severe that the insurance agent still uses a stick to walk.

The renegade fan was caught and his details were taken, but it is unlikely that he will ever be held accountable for his actions.

Instead, Rettensteiner is suing Bayern Munich for €120,000, claiming they failed to implement the necessary safety measures to prevent the accident from happening.

On Wednesday Rettensteiner’s lawyer argued to a Munich court that ticket checks before fans arrive at the turnstiles are normal at most German stadiums, while others have turnstiles so high that they are impossible to jump.

Both of these measures would have prevented the accident, the lawyer argued.

But the football club argued that two million fans pass through their gates every year – and of them only four or five jump the turnstiles.

Bayern’s lawyer, Gerhard Riedl, claimed that there had never been a similar incident at the Allianz Arena, arguing that the club had no responsibility for the accident.

“The Allianz Arena is one of the safest stadiums in the world,” he argued, according to Bild.

“There is no security risk, this was a regrettable accident.”

Nonetheless, the club admitted that games against Manchester United are classified as “high risk” games in which additional ticket checks should be conducted. They could not confirm whether such checks had been conducted on the day of the incident.

The presiding judge offered a compromise of a payment of €10,000 – a sum rejected by both sides. The case will continue on April 5th.