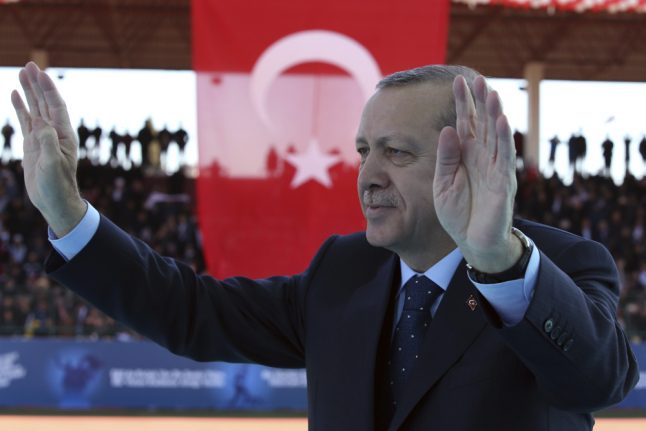 The sudden decision came after three weeks of furious exchanges between Turkey and the European Union over the pro-Erdogan rallies which have been banned in some of the bloc's member states.

“All future events that were planned have been cancelled. That is a decision that was made in Ankara,” said a Cologne-based spokeswoman for Erdogan's AKP party.

Separately, Zafer Sirakaya, president of the pro-Erdogan group that organized the rallies, said the events were cancelled for security reasons.

He told the WirtschaftsWoche weekly that “extremist groups like the (Kurdish separatist) PKK had carried out 11 attacks against our infrastructure”.

Turkey's ministers eager to tap into 1.4 million Turkish expatriate voters in Germany have sought to campaign in Europe's most populous country to whip up support for a “yes” vote in the April 16th referendum on scrapping the prime minister's post and creating a executive presidency.

German Foreign Minister Sigmar Gabriel told the Bild daily that with the electoral rallies scrapped “Turkish voters will be able to make their consideration in a calmer atmosphere”.

But in another sign of tensions between Berlin and Ankara, the German daily Süddeutsche Zeitung and the dpa news agency reported late Tuesday, citing an economy ministry document, that Germany has blocked since “since 2016 11 exports… of handguns, munitions and other arms components” to Turkey, citing concerns over human rights.

SEE ALSO: How German-Turkish relations have become a train wreck in 12 months

After explicitly saying such campaign appearances were not welcome, The Netherlands simply refused to allow Turkish Foreign Minister Mevlut Cavusoglu's plane landing rights and expelled another envoy who had travelled in by road.

Ankara reacted with fury, with Erdogan accusing Germany and The Netherlands of “Nazi” practices, sparking uproar in Europe.

On Monday, Chancellor Angela Merkel warned that Germany could issue a blanket ban against future campaign events by Turkish politicians unless Ankara halted its Nazi insults.

Rotterdam mayor Ahmed Aboutaleb separately appealed for calm Tuesday among the Dutch city's sizeable Turkish community, after an unauthorised pro-Turkey demonstration in the port city flared into violence 10 days ago.

“Of course, we will never dispute or deny Rotterdam Turks' involvement and loyalty to Turkey. However, what we don't want is that the call disrupts the local community,” he told the Algemeen Dagblad newspaper in an interview.

But Erdogan kept up his attacks, telling a rally in Ankara on Tuesday that a “yes” vote was the best response to what he called a “fascist and cruel” Europe.

“This Europe, like before World War II, is a racist, fascist, cruel Europe… An anti-Islam and anti-Turkish Europe,” Erdogan said in his latest onslaught against the European Union.

Fed-up over the row, Austria's government said it would put a draft law to parliament on banning foreign politicians from campaigning in the country.

Germany has repeatedly said it prizes relations with Turkey, because it is home to three million people of Turkish origin – a legacy of the “guest worker” (Gastarbeiter) programme of the 1960s and 1970s.

But relations have been put to the test, especially since a failed coup aimed at ousting Erdogan last July.

As the diplomatic row escalated, Turkey summoned the German ambassador in Ankara on Tuesday following remarks by his country's intelligence chief Bruno Kahl.

Kahl had said that Berlin is yet to be convinced that the US-based Islamic preacher Fethullah Gulen was involved in last July's failed coup against Erdogan.

Berlin has emerged as a strident critic of Ankara's post-coup crackdown, which has seen more than 100,000 people arrested or dismissed from their posts over alleged links to the plotters or to Kurdish militants.

Ankara has in turn accused Berlin of harbouring “terrorists” and of failing to respond to requests to hand over suspects from the coup as well as Kurds it believes are members of the outlawed Kurdistan Workers' Party (PKK).

Turkey on Sunday protested a pro-Kurdish rally in Frankfurt where demonstrators carried symbols of the PKK, which is listed as a terror organisation not just by Turkey but also the EU and the United States.

By Hui Min NeoEO with Raziye Akkoc in Ankara