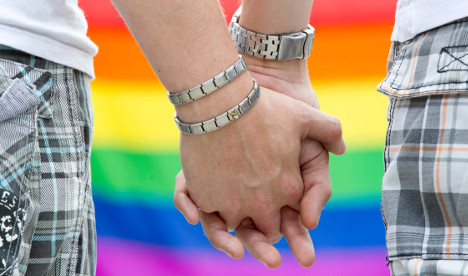 Fritz Schmehling was just a teenager when he was convicted in 1957 under a Nazi-era law against gays that remained on the books for decades after the war.

“Back then, you lived with one foot in prison,” Schmehling, now 74, told AFP at his modest top-floor apartment in Berlin.

Schmehling is now one of an estimated 5,000 gay men who could receive compensation as Germany moves towards clearing their criminal records under the former Article 175.

Although it dated from 1871, it was rarely enforced until the Nazis came to power, and in 1935 they toughened the law to carry a sentence of ten years of forced labour.

More than 42,000 men were convicted during the Third Reich, and sent to prison or concentration camps.

In 2002, the government introduced a new law which overturned their convictions, and also applied to those convicted of desertion during Nazi rule.

But that move didn't include those convicted after the war, when Article 175 was still in force.

West Germany reverted to the pre-Nazi era version in 1969, only fully repealing it in 1994.

When the law was still in force, gay men were forced to seek intimacy in public toilets, parks and bars that could only be accessed by ringing a doorbell, away from authorities' prying eyes.

Schmehling's earliest sexual experiences came as a youth in the Black Forest region of southwestern Germany, which was under French occupation.

“After my first time with a man, a member of the French military, I knew: that's what I want,” he said with a chuckle, still nattily styled with brightly coloured braces and a handlebar moustache.

Schmehling, then a carpenter's apprentice, said he was the one who initiated the fateful encounter with another older man.

“I was at my work bench when the police picked me up. They asked me embarrassing questions, without my parents or a lawyer, while they showed me pictures of the man,” he said.

“They told me I had committed a sexual offence. It was the first time I heard the word 'gay'.”

Schmehling was convicted when he was 15 and sentenced to four weekends of juvenile detention.

The man he was caught with spent more than seven years in prison for their “crime”. They never spoke again.

No internet, no personal ads

As soon as he reached the age of 21, Schmehling escaped his stifling small town in 1963 for the bright lights of West Berlin.

“I repressed the memory of my conviction,” he said. “I had a lust for life.”

Schmehling said for gay men, sex and love were dirty secrets they had to hide from the law, even in Berlin which in the 1920s had been a haven for sexual minorities.

“I was a labourer so I didn't have much time to seek pleasure. You didn't have the internet, you couldn't place a personal ad 'man seeks man',” he said.

Schmehling said a friend with police connections would warn him when there were going to be raids.

“They would take everyone down to the station in a police van and fingerprint them. I was very lucky not to be arrested.”

But his previous criminal record effectively barred him from employment in the public sector.

Schmehling eventually embarked on a series of long-term relationships, including with Bernd, a musician and his partner of 28 years who died in 2011.

After each of them was diagnosed with cancer, they entered into a civil union, which was introduced in Germany in 2001.

It ensured Schmehling would be entitled to Bernd's pension. The flat is still filled with his books and pictures.

Schmehling said his biggest regret was that Germany failed to clear the victims' names before Bernd died.

“He told me, 'I don't think I'll ever see the day these convictions are lifted'. I think he would have been as happy as when the Berlin Wall fell.”

'It weighed on you'

While Schmehling can expect modest compensation, Gottfried Lorenz, 76, feels shut out by the long-delayed reform.

Lorenz, a professor in the northern city of Hamburg and a longtime gay rights activist, was subjected to a two-month-long criminal probe in the 1970s but escaped conviction.

“I was studying in Saarbrücken (western Germany) and tried to approach a man, who ended up attempting to beat me up and demanded money and my ID. So I called the police,” he said.

Both men were arrested before prosecutors finally dropped the case.

Nevertheless, every gay man in the country had to behave as if he were a criminal.

“The discrimination was even worse – at work, in your family, in church, political parties, trade unions,” Lorenz said.

“You lived in fear that word would somehow get out,” with many men entering into sham marriages.

Despite great strides for gay rights, Lorenz said he feared a potential backlash with the new legislation.

“People may say, 'Oh the gays again – you've already achieved everything you wanted'.”