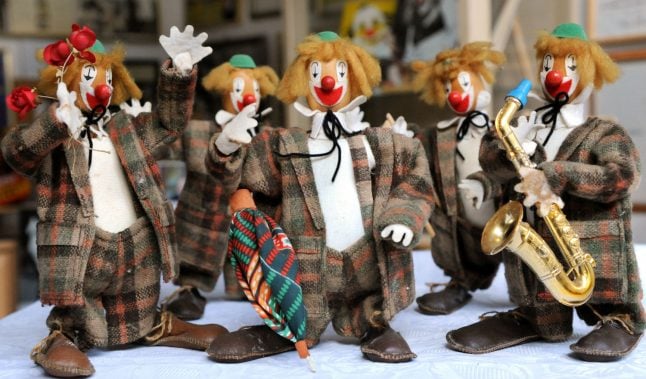 An exhibit at the Clown Museum, Leipzig. Photo: DPA

The museum's 'biggest' piece of art on display. Photo: DPA.

The Schweine Museum in Stuttgart claims to be the largest pig museum in the world. Inside, you can feast your eyes on a porky 23 rooms worth of piggy paraphernalia.

The collection was originally started by a lady called Erika Wilhelmer and is today displayed in three stories of the old slaughterhouse in Stuttgart.

The main focus of the museum is the cooking, mythology and history of pigs. But you can even get married here!

Once you’ve worked up an appetite taking in more swine than you will ever see again in your life, you can enjoy a pork-based meal in the restaurant-cafe. Just one of the many pig figurines to be found at the Stuttgart museum. Photo: DPA Do you really know what you’re eating?

Under the motto “additives belong in a museum, not in food,” this museum spreads information regarding the function, manufacturing, risks and side effects of the additives in our food.

Dropping the bombshell that many additives do not have to be declared on food packaging, and that even organic foods are allowed to include additives, this museum will destroy any faith you had in your control over your food.

But can this undoubtedly interesting topic be stretched out into a whole museum? Claiming to be the only museum in the world dedicated to presenting the potato through the lens of art and art history, eight themed rooms take you through the life of the potato, from its employment as a currency to its multi-faceted food uses.

The museum also hosts a collection of books from the Otto Eckart Foundation, which document the historical importance of the potato. This unique find explores the historical intertwining of eggs with Easter, and of course displays Easter eggs of all shapes, designs and sizes, both natural and made from porcelain.

From the beautifully intricate and tasteful to displaying the brash logos of well-known brands, these eggs surely are a feast for the eyes.

The collection was created by women from Sonnenbühl-Erpfingen in 1980, from which the museum was born in 1993. René Koch posing with some of his collection. Photo: DPA

Make-up artist René Koch opened this museum as a way to show off his private collection of lipsticks, as well as posters and cosmetic formulas from baroque times to the present. The museum also includes films from the post-war period to today.

Adding a touch of celebrity to the exhibit, you can also revel at the kiss marks of stars such as 1970s-80s Welsh singer Bonnie Tyler and German cabaret artist Ute Lemper. Plus visitors can pick up some expert tips on how best to apply their lipstick. Museum owner Hans-Dieter Hormann with three of his many figurines. Photo: DPA

Okay, so this one actually sounds pretty fascinating.

Clowns were expelled from the theatre of famous German director Caroline Neuber in Leipzig in 1737. In 2007, they retaliated, forming a clown association and a museum.

In an attempt to support clowns, this museum provides a home to more than 3,000 clown figurines from around the world, 350 circus posters, film recordings, costumes, newspaper articles, clown marionettes, and indeed “many gifts from famous clowns”. Boasting to have the oldest mustard grinders in the world, this museum can actually be found in two locations, one being in Cologne and the other in the small town of Cochem in Rhineland-Palatinate.

Each museum has one grinder, both manufactured in 1810. And after restoration, they are still used to make mustard today under the motto “quality not quantity”.

If you are asking who on earth would create a museum around a single object, the clue might be in the shop which adjoins the museum, where you can buy rather pricey “historical mustard.” Do you know who Ferdinand Gerstung and August Ludwig were? That knowledge gap is about to be filled. The astute pair noticed the glaring need for a bee museum way back in 1910.

Renovated in 2002, the museum exhibits everything you need to know about the biology of bees, the history of beekeeping, as well as present-day apiculture (for those of you who don’t know, that’s the fancy word for beekeeping).