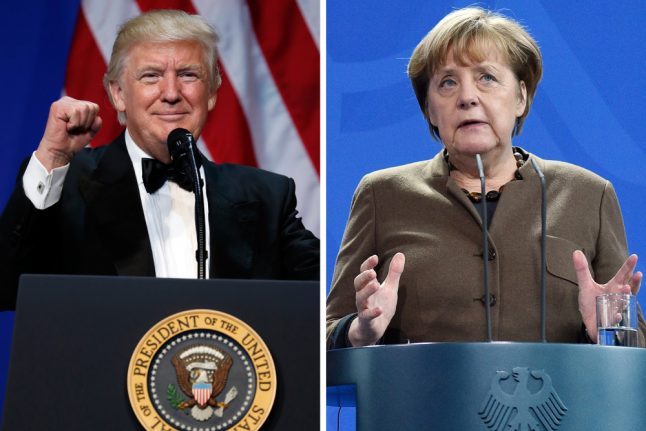 The meeting had been set to take place on Tuesday, but was postponed due to a blizzard on the East Coast of the US.

Now as Merkel makes her way to Washington, she faces a wide range of hot topics to discuss, as she previously has over her 12 years in office in meetings with both former Presidents George W. Bush and President Barack Obama.

“Obama disagreed with Merkel very much on how to deal with the Euro crisis and the Greek crisis… and yet that never destroyed the fundamental trust of the relationship between the two,” explains transatlantic affairs expert Jan Techau to The Local.

“And the same with Bush, with whom she had to deal with a number of difficult issues as well… They were not always on the same page, but at the same time there was always enough transatlantic basic agreement that you would never have to fear that some fundamental fallout was looming.”

But this trip could stand to be her most challenging because of some major differences: the American administration and Germany itself are not what they once were.

“This visit with Merkel is seen as kind of the Western summit, the two most important Western political leaders coming together under very, very difficult circumstances,” says Techau, who heads the Richard C. Holbrooke Forum at the American Academy in Berlin.

“Germans are notoriously reluctant to embrace big foreign policy issues, and here all of a sudden they are the one player that matters next to the US.”

A relationship with ‘baggage’

Before even seeing each other in the flesh, the two leaders' relationship already comes with personal “baggage”, as Techau describes. Trump has attacked Merkel for “ruining Germany” and repeatedly has used the country’s decision to take in large numbers of refugees as support for his crackdown on immigration.

And Merkel herself decided that she needed to remind Trump of the basic tenants of a free democracy when he was elected, as if he wasn’t already familiar with such principles.

But maintaining such a frosty relationship does not seem to be an option: the two, in different ways, need each other, Techau argues, especially in regards to Germany’s upcoming election.

Trump may be tempted to pressure Merkel into further ramping up military spending, which Techau says he could have the leverage over her to do. But if she comes back to Germany with plans announced for further military missions, this could potentially lose her votes among the more pacifistic German public.

This in turn would also be bad for Trump, Techau notes, because it could lend further support to her most serious challenger: the left-of-centre Social Democrat Martin Schulz, who has been styled as an anti-Trump figure. And working with Schulz would be even more difficult for the Republican President.

“From Trump’s perspective, keeping Merkel is actually a good thing,” Techau says. “So he might want to treat her nicely.”

Who will have the “upper hand” in their brief meet-and-greet is hard to say, Techau observes. On certain issues, Trump’s stubborn resistance to established means of executing plans won’t get him far with Merkel. For example, his administration recently attempted to start bilateral trade talks with Germany, but Berlin had to remind them that trade deals are handled through the EU.

“It often doesn’t register with people from the outside that this is not something you can negotiate at a national level,” Techau says. “No matter how much and how hard the Trump folks push for some sort of bilateral agreement, they will not get anywhere with it.”

If Trump’s administration did try to offer individual EU countries trade deals, Techau said this would be a “commercial declaration of war” which Germany would not stand for.

Trump’s team have also criticized Germany for its large trade surplus with the US and how more Americans buy German products than vice versa. He could try to narrow this gap by calling for some kind of German-sponsored investment plan in the US, but Techau said something like this would likely not alter the fundamental reality of trade between the two.

But even if Trump gets nowhere in his talks with Merkel on trade, he could still try to spin it to his advantage politically.

“He has defied some of the facts of life in the past and cashed in on them quite greatly,” Techau says.

But when it comes to military spending, Trump has a point about America’s NATO allies not doing enough, Techau notes.

“He has the upper hand when it comes to security and defence, where the Europeans as we all know are abysmally under-performing, and where they need to announce more defence spending.”

And Trump will probably demand more active participation when it comes to fighting Isis. But as Techau mentioned before, this creates a difficult situation for Merkel with her constituents.

“I could imagine her asking him in private, ‘Look Donald, I have an election year. I have to do all kinds of things that you won’t like but I have to do them to get reelected. Don’t put too much pressure on me between now and September and you will get something in return if I’m successful’.”

And Merkel will also be looking for Trump’s input in setting the G20 agenda, which she will be hosting in Hamburg in July – will Trump be on board with her priorities, or reject them to go his own way?

“The Germans want to make their G20 presidency this year a success, but they need the US for this.”

Ultimately no major decisions are set to be made on Friday given Trump’s limited time with Merkel before he heads down to West Palm Beach, Florida.

“At the moment there’s a lot of speculation, but it’s certainly going to be one of the most closely watched meetings.”