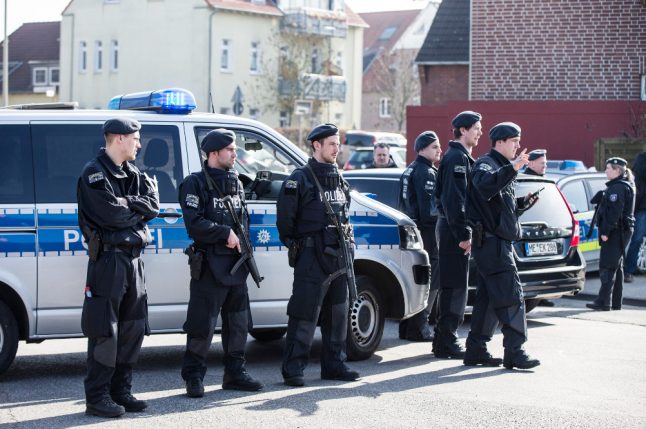 Police in Duisburg amid the bank hold-up. Photo: DPA.

The quiet Duisburg district of Rumeln became the centre of a national news story on Thursday morning when police reported a possible hostage situation, with at least one armed man inside a Sparkasse bank in the district.

Police said that before the bank opened, a female employee had entered the building and became suspicious. According to the Rheinische Post, she was alarmed by noises coming from the vault room. She fled and called police at around 8.40am.

At that time, two other employees were still inside, one of whom escaped from the building at about 11.30am and became a witness to police. The other was later found by police, tied up inside the vault room.

Police said they believed at least one armed man had been inside with the two employees, leading officials to deploy special police units and block off the area in response.

At about 11.45am, police said that two men had been arrested at a bakery in the area, but it was still unclear how they were connected to the hold-up.

Shortly under an hour later, police confirmed that the hostage situation was over and there was no longer a threat. In the intervening time, they had entered the building and found a male employee tied up in the vault room.

But there was no sign of the robbers, and police also later reported that a large sum of money had been taken from the vault.

The investigation will now turn to what happened to the robbers. It is not clear when they left the building, and whether this happened before the police arrived.

Police have said that they are looking for a red VW Golf that was seen driving away from the bank with two young men inside before police were initially alerted.

The two men who were arrested in the late morning were not found with large amounts of money on them. But by Thursday afternoon, police had not ruled out that they were involved in the crime.