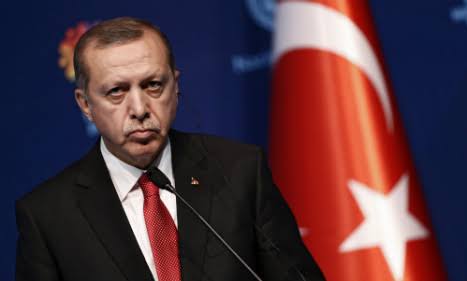 “A Turkish campaign has no business being here in Germany,” he told public broadcaster ARD, saying he is “strongly opposed politically” to such events.

Ankara is locked in a dispute with several European countries which have sought to stop Turkish ministers from holding rallies in their countries ahead of an April referendum aimed at expanding President Recep Tayyip Erdogan's powers.

German local authorities this month scrapped such campaign appearances overt logistical problems, sparking an angry response from Ankara, which is keen to win votes from the Turkish diaspora.

The row escalated sharply at the weekend after The Netherlands refused to allow Turkish ministers into the country for rallies.

De Maiziere said while he is opposed to such appearances, the question of whether to impose an outright entry ban requires careful consideration.

“But there are limits — clear limits, for example in the criminal code. It Is hardly noticed,” he said.

“Someone who insults and maliciously condemns Germany has committed a criminal offence. That would at least be a limit,” he said.

Erdogan had labelled the decision by German local authorities to halt the rallies as “Nazi practices”, sparking consternation in Berlin.

Chancellor Angela Merkel called such rhetoric “depressing”, saying it belittled Holocaust victims and was “so out of place as to be unworthy of serious comment”.

But on any future rallies, she said: “We continue to view such appearances by Turkish government representatives as possible as long as they are duly announced in a timely manner, and in an open way.”

Through the dispute, as well as Ankara's arrest of a correspondent of German daily Die Welt, Schaeuble said: “Turkey and those responsible in Turkey have destroyed the basis for further progress in cooperation.”

The latest row over rallies is one in a long list of issues surrounding human rights and freedom of expression that plague Ankara-Berlin ties, particularly since the failed military coup against Erdogan in July.

Berlin has emerged as a strident critic of Ankara's post-coup crackdown, which has seen more than 100,000 people arrested or dismissed from their posts over alleged links to the plotters or to Kurdish militants.

Amid the tension, Florian Hahn, a politician from Merkel's Bavarian allies the CSU, called on Berlin to withdraw its troops stationed at Turkey's Incirlik air base.

De Maiziere however rejected the call, saying German troops were there to “protect NATO interests, and therefore our interests”.