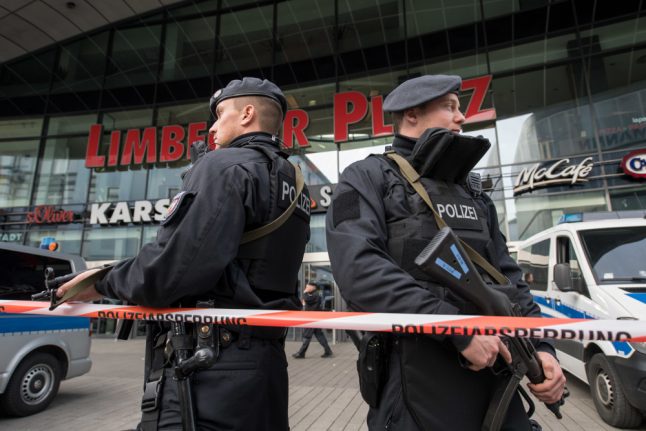 Photo: DPA
Police sealed off a major shopping centre in the central city of Essen on Saturday, citing the threat of a terror attack.
Security sources told DPA, Bild and broadcaster WDR that the call for an attack came from an Isis fighter in Syria, who was from Oberhausen, near Essen.
The German domestic security agency BfV believes that Isis was “almost definitely” behind the threat, local media reported.
Police questioned two men from Oberhausen on Saturday and searched through their homes. However, DPA sources say the men were not direct suspects, but rather could have been in contact with the mastermind behind the possible attack plan. The man suspected of calling for the attack has reportedly long been on police radar in Oberhausen.
Security sources further told DPA that the main suspect was in a jihadist area of Syria, and had tried to motivate people through online messaging to attack the shopping centre as part of a so-called “hit team”. Part of the team would reportedly come from Germany, while the other part would come from outside the country.
Still unclear on Saturday was how many people would have participated in the suspected plan.

“The shopping centre will be closed all Saturday due to security concerns. The police have concrete information regarding a possible attack,” local police said in a statement published on social media.

There was no announcement of arms or explosives being found, police said two men had been picked up for questioning.

The country is on high alert following scenes of carnage at a Christmas market carnage in Berlin in December, when an Islamic State jihadist rammed a truck into a crowd of pedestrians, killing 12 people.

Security services quoted by the Bild newspaper described the threat as a potential multiple suicide bombing at the mall, one of the biggest in the country.

“Many agents are deployed onsite. This is a major operation,” a local police spokesman told AFP, indicating the lockdown included the 200-store Limbecker Platz in downtown Essen, nearby parking garages and an underground rail station.

Sniffer dogs were also been deployed at the site. Essen, which is in the industrial Ruhr region, has a population of approximately 500,000.

The police said they had been alerted to the threat by “another department” but no German agency has confirmed if it was involved.

Interior ministry spokesman Tobias Plate told AFP that the operation was being handled by the local police force but added that his ministry was in “constant touch” with the GTAZ, a joint counter-terrorism centre used by 40 internal security agencies.

Last July, a German-Iranian teenager who police say was obsessed with mass murderers, shot dead nine people at a Munich shopping mall before turning the gun on himself.

The country is on high alert following scenes of carnage at a Christmas market carnage in Berlin in December, when an Isis jihadist rammed a truck into a crowd of pedestrians, killing 12 people.

Isis has claimed responsibility for attacks in Germany in the past year, including the murder of a teen in Hamburg, a suicide bombing in Ansbach and an axe rampage on a train in Würzberg that injured five.