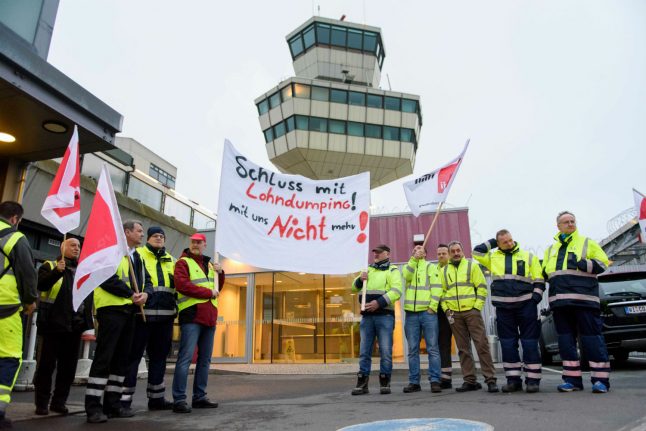 A spokesperson for the local Airport Association confirmed that almost every single flight out of and into both Berlin airports had been affected by the strike.

The strike started at 4am on Friday morning and is set to last until 5am on Saturday, with the airports warning passengers to expect delays after the strikes end too.

Customers with the airlines Lufthansa, Eurowings and Air Berlin flying inside Germany could have their tickets converted into train tickets with Deutsche Bahn (German Rail).

Those flying with budget airlines Transavia were not so lucky. The KLM subsidiary only offered its customers the opportunity to book a flight at a later date or receive the cost of their ticket back.

SEE ALSO: What you need to know about the strikes crippling Berlin airports

Many travellers flying abroad were left scrambling to make contingency plans, with buses leaving from Tegel on Friday morning to Hanover Airport, where several flights had been rescheduled, Tagesspiegel reports.

The strike also comes on the weekend when Berlin hosts the International Tourism Fair, which is expected to draw tens of thousands of visitors from across Europe.

The call to strike was made by union Verdi, which has demanded a pay raise of one euro per hour for ground staff with work contract terms of at least one year. Currently ground crew members earn on average €11 per hour.

The union has been negotiating with a group representing companies that provide ground transport services to airports. The employers' group on Tuesday offered a pay raise of 8 percent over the course of three years, but the union rejected this proposal.

“Unfortunately a strike is inevitable because the employers have still not delivered a suitable offer, and it seems that it's not currently possible to negotiate an agreement,” said Verdi negotiator Enrico Rümker.

The employers' group called the strikes “irresponsible”, saying the action pushes finding a solution further into the distance.

“We have done everything within our power to avoid a strike,” said a spokesperson for the employers' group.