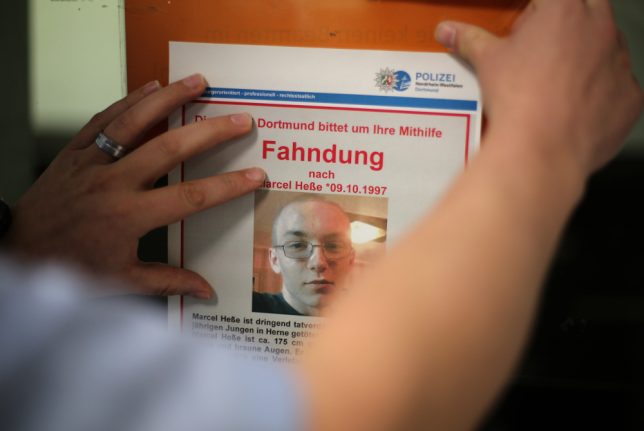 A wanted poster for the suspect, Marcel H. Photo: DPA.

The gruesome discovery of nine-year-old Jaden, stabbed to death in Marcel H.'s basement on Monday, launched a nationwide search for the suspect, who police said could be contemplating further crimes.

Disturbing potential evidence emerged online, including a selfie appearing to depict the bloody suspect with the boy's body, and an audio message purporting to be the suspect describing the act in a “cold-blooded” manner, as police described.

After he turned himself in, the suspect gave police information that led them to find yet another victim.

The crime: The lawyer for Jaden's family said that their neighbour, Marcel H., lured the little boy over under a false pretext, the boy's brother noting it was to help hold a ladder.

Images of the suspect emerged online, and an internet user alerted police, who then found the boy stabbed to death in the basement. At about the same time as the police discovery, Jaden's stepfather arrived at the scene to look for the boy.

The arrest: Marcel H. was described by police at the beginning of the search to be potentially dangerous. Authorities received more than 1,400 tips over the course of the days-long hunt.

The suspect on Thursday went to a food stand and said: “I am the one they're looking for, please call the police”. Police were then able to arrest him.

Once in custody, Marcel H. told officers about a fire at a home nearby. There police found a dead male body.

What we don't know

The motive: The suspect was previously not known to police as a criminal. Police have described him as a loner who had little social contact with others. But so far police have not stated a potential motive.

They have also said that he was potentially suicidal.

The online evidence: Police at first described the images posted online that led to the boy's discovery as being posted on the darknet. They later told reporters that someone who had been chatting with the suspect through messaging service WhatsApp had contacted them. These chats and images then somehow ended up on the online forum 4chan, as reported by Vice.

The online posts included the selfie of the suspect with a body.

Later someone online posted in a chat forum that they were Marcel H. and described fighting and torturing a woman to get her bank details. Police are still investigating whether these messages were indeed from Marcel H.

Then an audio message was posted online – on Facebook, according to Die Welt – also claiming to be from Marcel H. and describing the murder of Jaden. Police described the account as “cold-blooded”. And while they presume the message came from the suspect, police are not yet certain.

The second body: Police have not yet released details about the body found on Thursday, as of Friday morning. Nor have they said how the person could be connected to Marcel H.