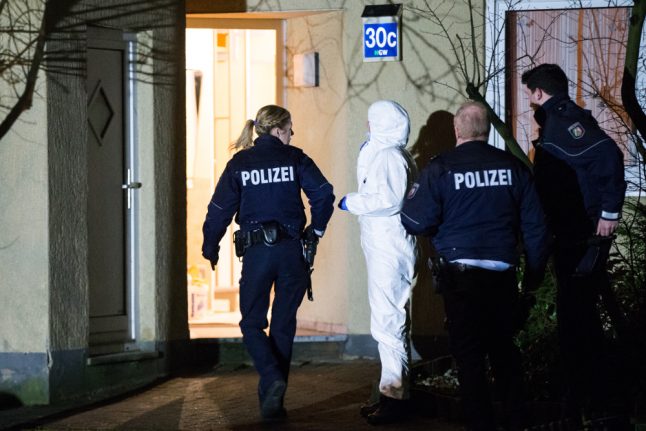 The scene of the crime in Herne. Photo: DPA.

The nine-year-old boy was killed on Monday evening in the Ruhr Valley town of Herne. Police believe his 19-year-old neighbour, Marcel H., is responsible because a user of the restricted access darknet network alerted them to a video posted in which the young man reportedly bragged about the killing.

Police have not disclosed exactly what was depicted in the video, but state interior minister Ralf Jäger said on Tuesday that he could not remember any case where “the murder was filmed and published”.

Images of the suspect also started circulating beyond the darknet on regular, publicly accessible websites, showing the young man with bloody hands next to the body of a boy.

The child was found stabbed and lying dead in the basement of the suspect's house.

Marcel H. is currently on the run and police are urgently searching the area for him because he seemed to indicate he could commit further crimes. Police would not comment on the suspect's possible motive, but noted that he suggested he may attempt suicide.

The suspect is described as 1.75 metres tall, blond and thin, wearing glasses with camouflage pants and a vest.

Photo released by Bochum police of the suspect.

Police have warned anyone who recognizes him not to approach him, as they said the martial artist could be dangerous and is possibly armed. Instead they advise witnesses to call police.

Marcel H. is unemployed and believed to be living alone in the house. The family was reportedly supposed to move and his parents were no longer there.

He also reportedly had little social contact with others, and was not previously known to police.

“We are speechless and shocked,” said town mayor Frank Dudda through a spokesperson. “We are grieving with the relatives.”

The victim's school has brought in ministers and psychologists to offer consultations.