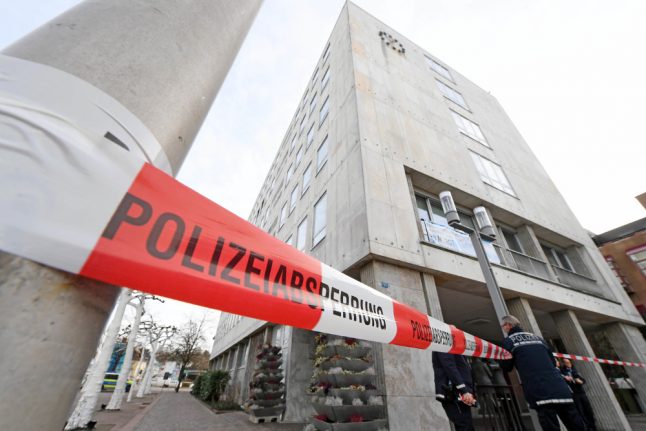 The Gaggenau city hall blocked off after the bomb threat. Photo: DPA.

The bomb alert was lifted by mid-day after the town received the threat by phone.

“We received a bomb threat by phone at around 7:30am,” Dieter Spannagel, a local official from the western town of Gaggenau, told AFP.

“The caller cited the cancellation of the event with the Turkish justice minister as a reason.”

The city hall was evacuated for several hours, but an all-clear was sounded at 11:35am after investigators found nothing suspicious.

Police added that there were no indications as yet on the identity of the anonymous caller.

The town of about 30,000 inhabitants on Thursday withdrew an agreement to lease a hall to the Union of European Turkish Democrats (UETD) for a rally, with Justice Minister Bekir Bozdag as the guest speaker.

Gaggenau authorities said a large number of visitors were expected as the event had been widely publicized, but that the town did not have the capacity to host such a big crowd.

“The Bad Rotenfels hall (in Gaggenau), parking lots and road access are insufficient to meet that demand,” they said.

The decision was met with an angry response from Ankara, with Bozdag himself saying he was also scrapping talks with Germany's Justice Minister Heiko Maas, whom he had been due to meet during the trip.

Turkish Foreign Minister Mevlut Cavusoglu on Friday accused Germany of working for a “no” vote ahead of the April referendum that would discard the post of prime minister for the first time in Turkey's history.

Germany is home to about three million people of Turkish origin, the legacy of a massive “guest worker” programme in the 1960s and 70s. It is the biggest population of Turks in the world outside Turkey.

Erdogan's government is keen to harness their votes for the April 16th referendum.

Critics say the new presidential system will cement one-man rule in the country.

Turkish politicians have sparked controversy over their visits to Germany to hold political rallies, particularly at a time when Berlin-Ankara relations are frayed by a series of disputes since the failed coup that aimed to oust Erdogan last July.