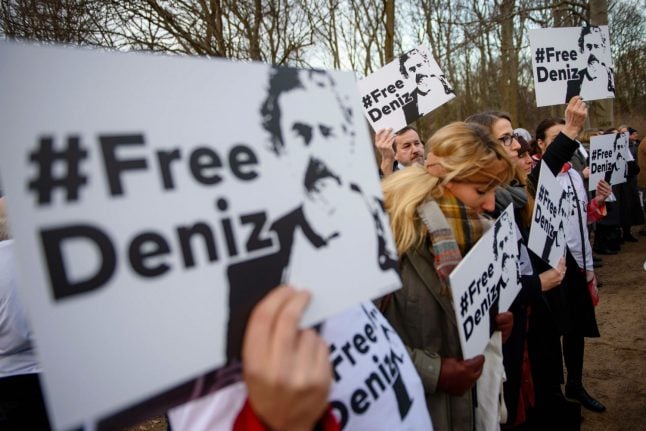 Demonstrators in front of the Turkish embassy in Berlin. Photo: DPA

The ministry initially said on Twitter that State Secretary Walter Lindner had “summoned” the ambassador of Turkey, before clarifying that the envoy was “asked in”.

“It was not a formal summons, the Turkish envoy was asked in for talks,” it said in a second tweet.

The talks came after a court in Istanbul on Monday ordered provisional detention for Deniz Yucel, 43, a correspondent of the German newspaper Die Welt.

Yucel, who holds dual Turkish and German nationality, had been held since February 18th in connection with news reports on an attack by hackers against the email account of Turkey's energy minister.

His employer said he had been charged with spreading terrorist propaganda and inciting hatred.

Deploring Ankara's treatment of Yucel, German Vice Chancellor Sigmar Gabriel said the case “made it very clear that there are major differences in Germany and Turkey … in how the principles of the rule of law and how press and media freedom is evaluated”.

He added the Turkish envoy was told that “these times are less than easy for Turkish-German relations, and that the Yucel case would only make everything harder”.

Relations between Berlin and Ankara have been strained by a series of disputes since the failed coup aiming to oust Turkish President Recep Tayyip Erdogan in July 2016.

Germany has been a vocal critic of Ankara's massive crackdown following the putsch, in which some 43,000 people were arrested, and 100,000 fired or suspended.

Turkey has also clamped down on the press, arresting hundreds of journalists without trial.

About 170 media outlets have been closed and nearly 800 press cards cancelled, according to journalists' associations.

The Yucel case has sparked an outcry in Germany, with Chancellor Angela Merkel on Monday calling the Istanbul court's decision “bitter and disappointing”.