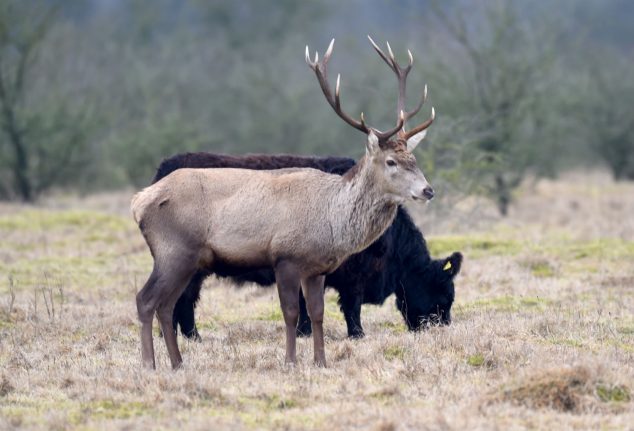 Sven the stag and his cow herd. Photo: DPA

A stag has joined a herd of cows in Flensburg, near the Danish border in Schleswig-Holstein, broadcaster NDR reported on Sunday.

The five-year-old red deer, named Sven by the locals, has been visiting the Galloway cows for two years and is spending increasing amounts of time with the herd and his favourite cow, Sarina.

“He probably thinks he's a cow as well by now,” joked Gerd Kämmer, head of local landowner the Wischen Association, to the Flensburger Tageblatt.

Kämmer had assumed that Sven would eventually leave the group after a few weeks or months. Indeed, it seemed that this had happened when Sven vanished for a few months in the summer of 2015. But by the autumn he had returned to the group.

“He has learned that he is safe here and will not be hunted on the nature reserve,” Kämmer added.

Katrin Koch, from the Nature Protection Association (NABU) in Berlin, said “there appears to be an advantage for the stag by keeping himself with the herd.

“His antlers are strongly formed suggesting he is a somewhat older animal. He is possibly used to people and domesticated animals – where he comes from is of course unknown.

“Perhaps he feels safer in the herd of cows because he can't be hunted there. Or he profits from the additional food supply for the cows, in the event that hay, for example, is offered during the winter.”

With time, Sven has fitted in more and more with his bovine buddies. He now has little fear of walkers and allows them to come as close as 20 or 30 meters away from him.

This is unusual not only because deer are typically skittish, but also because red deer normally retreat to the woods during the daytime.

“And, to the annoyance of foresters, they nibble on the young trees there out of boredom” said Kämmer, who is a trained biologist.

To prevent the deer from totally defoliating the forest, their population has been controlled by hunters in recent years.

This has caused concern regarding Sven´s safety, and he is therefore soon to receive a radio transmitter so that the local landowners can learn more about where he moves.

“We want to learn more about where he goes and maybe also make him better known, so that he won't get shot at,” said Kämmer

“It would be a dream if he found other red deer, and maybe we could one day have a whole herd on the trust's land”.