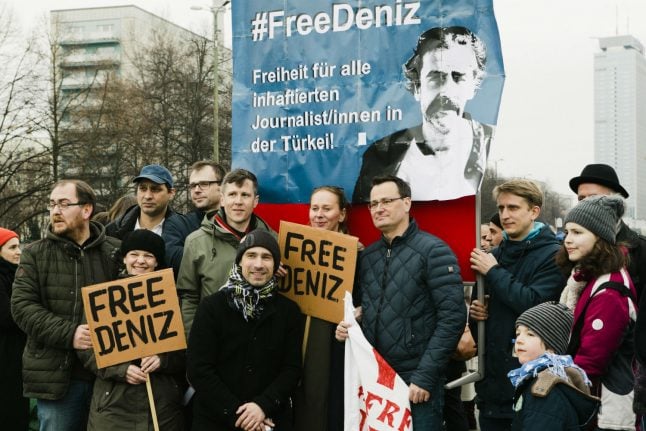 Demonstrators in Berlin protest against the detainment of Deniz Yücel. Photo: DPA
The German daily said its correspondent Deniz Yücel, 43, was detained on February 18 and his apartment searched in connection with news reports on an attack by hackers on the email account of Turkey's energy minister.
The minister, Berat Albayrak, is a son-in-law of President Recep Tayyip Erdogan.
The journalist “had reported – like numerous other journalists from international media – on emails that the leftist Turkish hacker collective RedHack had acquired from the private email account” of Albayrak, Die Welt said at the time.
“Among other subjects, the emails concerned control of Turkish media groups and influencing the public by means of fake users on the messaging service Twitter,” it added.
The paper says Yücel, who presented himself at the Istanbul police headquarters for questioning on February 14, is accused of “being a member of a terrorist organisation, misuse of data and terrorist propaganda”.
“Intellectual debate is the best instrument against terrorism, which paradoxically is what he is being accused of,” the group of 166 lawmakers in the Bundestag, the lower house of parliament, wrote in an open letter to Turkish Ambassador Ali Kemal Aydin.
A spokesman for the German foreign ministry said the government had “not the slightest information” suggesting that Yucel had violated his journalistic duties.
It is not the first time Yücelhas run afoul of the Turkish authorities. In June 2015 he was detained with three other journalists covering the seizure of a Syrian border town by Kurdish forces.
Turkey has clamped down on the press in the wake of the failed coup attempt in July 2016, detaining or expelling foreign correspondents for The New York Times, The Wall Street Journal and the French website Les Jours.