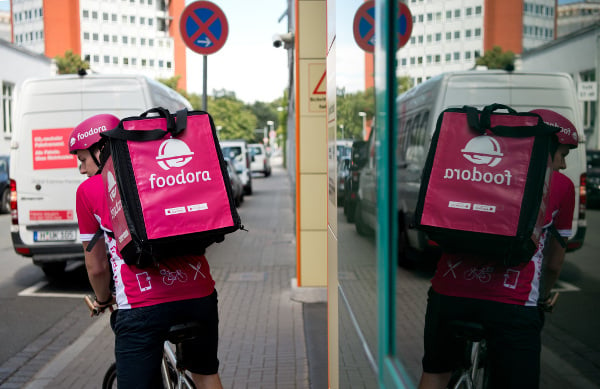 Walking his bike on the pavement, too tired to keep cycling, he observed drily that “there are better jobs.”

The 27-year-old Italian has been riding for Berlin-based delivery startup foodora for over a year.

In many ways he is your typical bike courier. Like most, he is male. But he is also young, international and killing time – he took the job to earn some money while figuring out what to do in Berlin.

He is part of the ‘gig economy’, the modern phenomenon of often uncontracted work, based on technology (riders work off a smartphone app), and flexibility – riders get to pick their own hours.

But Francesco doesn't seem to have built up much of an affinity to the company he cycles for.

“I don’t like their behaviour”, he stated in measured but frustrated tones. “They just want to make money.”

It was a sentiment shared by countryman Alessandro, who was leaving foodora's main rival Deliveroo after five months.

The part-time work earns him up to €900 per month, but he is heavily dependent on tips, which make up a third of his monthly income, he said while waiting for an order outside a Mexican restaurant.

A deliveroo rider picks up a meal. Photo: DPA

This isn't exactly the mood the delivery startups like to claim exists among their foot soldiers.

Foodora has grown enormously in the two years since its foundation in Berlin, spreading to over 50 cities in 10 countries. In Germany alone it has more than 2,500 contracted employees, with a large proportion of these in the capital.

It depicts itself as a large family. In a statement to The Local foodora called the riders one of the “pillars” of their work and asserted the importance of the “enthusiasm” with which “they lovingly bring every order to the door or office.”

But complaints about the burden on workers have cropped up periodically in branches across Europe. Neither the bikes nor the internet the riders use are paid for by the companies.

Deliveroo has also received criticism over pay levels and conditions. The British-based company hires riders as freelancers, meaning it can pay them less than the German minimum wage of €8.84.

Both Deliveroo and foodora have seen strike action in London and Turin, respectively, after disputes about incentive-based payment, as opposed to a guaranteed wage.

But Foodora Germany, is keen to emphasise the favourability of their riders’ working conditions. Unlike at Deliveroo, there is no freelance option – “without a signed contract, riders cannot work for us”, a spokesperson told The Local. A contract means health insurance, and a guaranteed minimum wage.

Certainly Max, a 19-year-old German who has been working for foodora for several months, has no complaints.

Taking a delivery on Kastanienalle in Berlin's Prenzlauer Berg at the start of his lunchtime shift, he said that cycling around the capital was an enjoyable way to make a living.

He reported his pay as more than satisfactory, with a healthy supplement of tips from customers who were generally polite.

But he admitted that it wasn't all plain sailing – the winter chill had to be confronted. Like several riders, Max said he preferred waiting outside restaurants. If he went inside, he'd get used to the warmth.

For Simo, a 30-year-old South Korean who came to Berlin on a working visa four months ago, it is a way to get by while he pursues his true passion of independent film-making. He enjoys the exercise that comes with life as a courier, but lives for his hobby.

It is “just about” enough to live on, he said.

*Some names have been changed in this article.