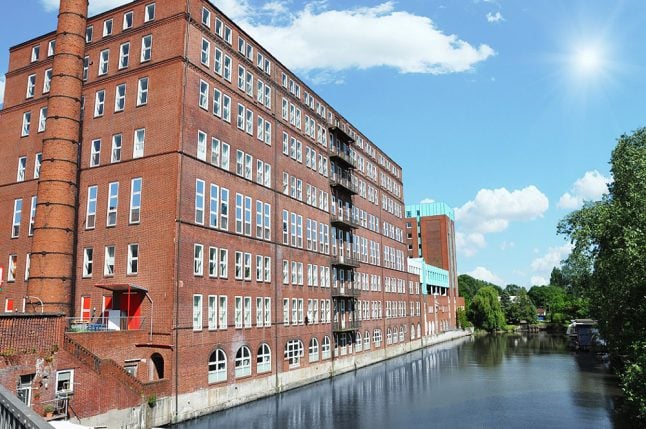 The future living and working space in Hamburg. Photo: © rent24

Rent24 announced on Monday that they are set to launch “Germany’s largest coworking and coliving campus” by next year in Hamburg – complete with a supermarket and fitness studio.

This city within a city is being created inside of a 7,500 square-metre disused factory building with six floors that will house open coworking areas, offices, micro apartments and more.

“It’s very difficult in cities like Hamburg and Berlin to find an affordable place to sleep that’s also close to your workplace,” founder and CEO of rent24, Robert Bukvic, told The Local.

“Finding a place to live that’s close to your work is like winning the lottery. A complete life goes on in this location and space.”

The “campus” is aimed at people in the startup and tech scene, including international, English-speaking professionals.

“We target startups all over the world, not only English- or German-speaking. There are a lot of Israeli startups for example,” Bukvic said.

“We don’t have a target as far as English- or German-speaking, but we see that most people in our coworking spaces are speaking English.”

And with a focus on short-term stay accommodation as well as long-term flats, the living and working space aims to appeal to those on the move, particularly foreigners rather than locals, Bukvic explained.

“We see a lot of foreigners in startups travelling a lot,” he explained.

“When you have a startup which joins join rent24 and, for example, they have a development team coming from abroad or another city, it’s always better to have them living near you than somewhere outside. You can hire them and you can host them in a place to both stay and work.”

The company would not yet release information about living costs for the new project in the rich, port city, but said they would keep rental rates at a “good deal” compared to market prices.

Their website advertises coworking spaces for between €199 and €299 per month.

Rent24 hopes the new campus will add to Hamburg’s growing tech scene, which perhaps doesn’t receive as much attention as the industry in the hip capital of Berlin.

“I think Hamburg is a great startup city with a lot of potential,” Bukvic said.

“The startup scene there is developing very fast. A lot of people talk about ‘Berlin this, Berlin that’, but a lot of cities like Frankfurt and Munich have a huge demand.

“Hamburg is a bit like combining New York and Silicon Valley,” Bukvic said of Berlin’s more affluent northern cousin. “They have their own, big creative scene.”