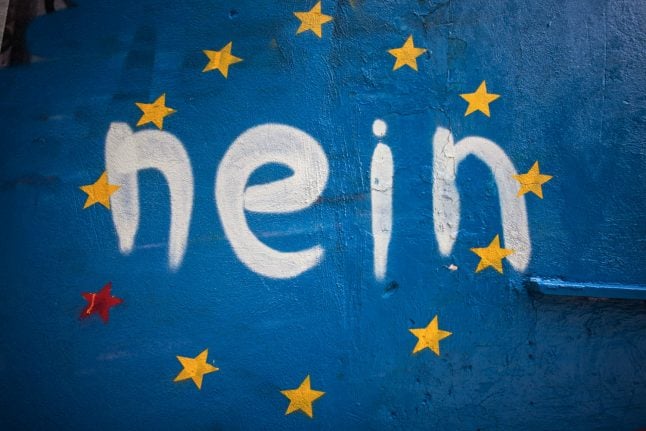 On Monday evening Germany’s hawkish finance minister Wolfgang Schäuble announced that Greece’s lenders had reached a “common position” on the country’s debts and that they could go back to Athens to discuss the latest tranche of debt relief.

The Washington-based International Monetary Fund (IMF) has been threatened to walk away from the bailout, saying Greece's debts are so huge that it is unable to stay on top of the repayments. It has demanded the eurozone reduce the debt burden to make the repayments more sustainable.

But the German government has once again been steadfast in its opposition to this, leading to new accusations that Berlin’s dogma of austerity is crippling the Greek economy and driving ever more Greeks into poverty and unemployment.

Unsurprisingly, the view in Germany on the effect of austerity is somewhat different to that found on the pages of Anglophone newspapers.

In an interview with The Local, Dr. Alexander Kritikos, an expert at the German Institute for Economic Research (DIW), resoundingly rejected the accusation that Germany was to blame for Greece’s woes.

“Every country is responsible for the politics it chooses and the politicians it elects,” he said, arguing that Greece had done very little to implement the structural reforms necessary to create a competitive business environment and encourage entrepreneurship.

“Over the last eight years, half a million Greeks have left the country because they are fed up with the level of bureaucracy.”

Those who are leaving are the country’s best and brightest, he argued: the business-minded people, top researchers and highly educated professionals who would be able to put Greece back on its feet. Kritikos explained that the German government’s resistance to a debt ‘haircut’ for Greece is based on three principles.

The first is the belief that the official figure of Greek debt – 180 percent of the country’s GDP – is inflated.

“The way several researchers see it, Greece’s real debt value is 100 percent of GDP, and with growth in the economy it will go down further.”

The reason for Germany's different calculation of the debt is that the bailouts have structured repayments over much longer time periods than those of Greece’s initial debts – some of the repayments take place over 20 years, others over 30, while at the same time interest payments have been substantially reduced.

“Debt as a proportion of GDP is clearly one thing if I have to pay it back tomorrow, but it is very different if I have decades to repay it,” Kritikos argued.

Secondly, Angela Merkel’s Christian Democratic Union (CDU) doesn’t want to be seen to be letting Athens off the hook in an election year.

Already facing a serious fight from the Alternative for Germany (AfD) for the right-wing vote over its immigration policies, writing off billions of euros of loans could play into the hands of the EU-critical party.

The CDU currently stand only a couple of percentage points in front of the centre-left Social Democrats (SPD) in most polling and Merkel has said that this will be the toughest election she has yet fought.

Debt relief in this election year “is simply not conceivable,” said Kritikos.

The third reason for the German stance is a desire not to further breach the “no bailout” clause in EU treaties, which state that the responsibility for paying off public debt should remain in the hands of the national government, the DIW expert pointed out.

For Kritikos, too much emphasis is placed on the question of debt relief and far too little on the lack of the type of structural reforms which would make Greece a modern functioning state.

“The German government has only paid attention to financial reform – cutting back on expenditures such as pensions and raising taxes.

“Berlin has given up trying to compel the current Greek government to implement these reforms, but hopefully this issue will return after Monday night’s result of the discussion in the Euro Group.”

Prof. Rolf J. Langhammer, senior expert on international economic developments at the Kiel Institute for the World Economy, stresses that Germany’s tough stance is also based on compelling Greece to implement reform.

“Germany focuses on reform implementation, not on debt relief and fears that the IMF view of less austerity and more debt relief would weaken the pressure upon Greece to actually implement reforms,” he told The Local via email.

“This is also why it is against a retreat of the IMF from the adjustment programme of the Troika: if only the European Central Bank and the EU Commission would remain in the driver’s seat, it fears a too lenient and accommodating position towards Greece.”