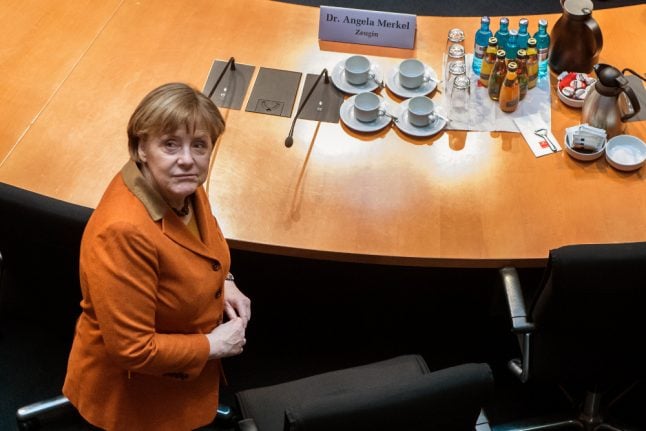 Angela Merkel before the investigative committee on Thursday. Photo: DPA.

“I assumed that the BND does not engage in such activities,” Merkel told a parliamentary enquiry into the surveillance practices of the US National Security Agency (NSA) and its German partners.

“It's a waste of effort and energy,” Merkel said about covert intelligence activities against friendly nations.

The panel has for three years looked into revelations since 2013 by fugitive US intelligence leaker Edward Snowden that the NSA was conducting massive Internet and phone data sweeps, including in Germany.

Of particular interest was the revelation that the NSA had long tapped Merkel's mobile phone, which strained Washington-Berlin ties at the time, leading Merkel to declare that spying between allies “just isn't on”.

SEE ALSO: How Merkel's criticism of NSA came back to haunt her

But the scandal widened in March 2015 with reports that the BND had helped the NSA eavesdrop on EU targets including the French presidency and foreign ministry as well as the European Commission.

Merkel said in her testimony that at the time she had voiced her public complaint to Washington, “I had no reason to believe that this was not being observed by the BND.”

She said there had been “technical and organisational deficits” within the BND, which reports directly to the chancellery.

Merkel also reiterated her position that a democratic country needs to strike “the right balance” between security and privacy protection.

She said she expected continued US-German intelligence cooperation under President Donald Trump, adding that this was “in our own interest”.

Last year Germany approved new measures to rein in the activities of its foreign intelligence agency after the scandal over improper collusion with the NSA.