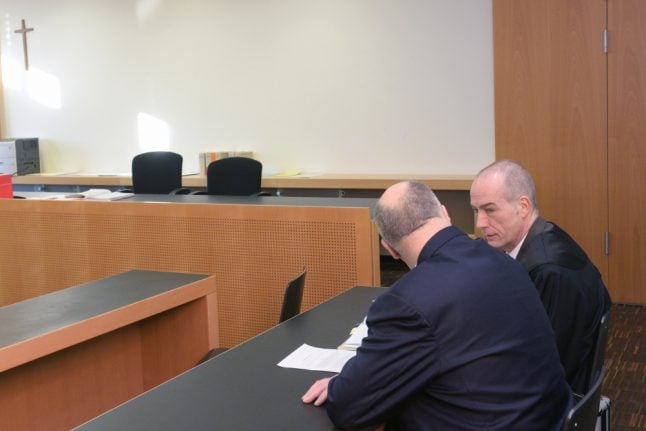 The officer, with his back turned, speaks to his lawyer in court. Photo: DPA.

Last March, a 17-year-old in Bavaria decided to take police up on their motto of being “your friend and helper” when a group of other teens started to attack him.

He had also claimed that sending a patrol car would take 30 minutes, though in fact there were two patrol cars stationed between five and ten minutes away at the time.

Not long after, the teen was beaten up and suffered “many blue bruises and a black eye,” he testified to the Augsburg court.

The court ruled against the 53-year-old police officer on Thursday, convicting him of causing deliberate bodily harm and sentencing him to pay a fine of €6,000.

The police department is also expected to hold a disciplinary procedure against him.

The officer, who had served for 36 years, acknowledged that his behaviour had been “absolutely unprofessional”. He explained that the reason he did not take the call seriously was because of the caller's calm, matter-of-fact tone.

He said he therefore didn't think it was a serious emergency and hadn't been listening properly.

But he recognized that: “The boy cannot help it if he comes across so cool on the phone.”

The officer also admitted that this was not the first complaint he had received while working in the control centre of the police. Currently he is no longer working with emergency calls while he undergoes psychological treatment.

The judge said that the officer's actions had not only shaken the 17-year-old’s trust in police, but also had “overall caused a great loss of confidence for the public”.