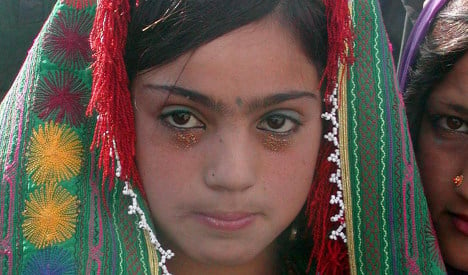 Leaders of the Social Democrats (SPD) and Chancellor Angela Merkel’s conservative Union parties said they had agreed on a proposed law to ban marriage for anyone under 18, according to a report on Tuesday by Die Welt.

A spokesperson from the Union parties also confirmed the agreement to DPA.

Currently, 18 is the minimum age for marriage, but with parental consent and court permission, 16-year-olds are allowed to marry adults.

Justice Minister Heiko Maas made the new proposal amid reports of hundreds of children arriving as refugees in Germany, already married to adults.

The proposed law would mean that marriages involving children under 16 would become invalid, including those performed abroad. The legal marriageable age is also planned to be raised to 18.

“It is simply necessary to go this way for the protection of young women,” said Union faction vice-chair Stephan Harbarth.

“A nation of law must ensure that marriages that are against the will of one of the participants will be denied.”

Still, there are differences among the parties. The CDU and CSU parties want to require youth services to go to family courts to have child marriages rescinded involving minors between 16 and 18 years old. But the Justice Ministry under Social Democrat Maas would prefer to allow some exceptions for certain ‘hardship’ cases.

The proposal will next go to Merkel’s cabinet for approval, before being presented to the Bundestag (German parliament) for a vote.

International NGO SOS Children’s Villages warned last May that ever more refugee children are forced to marry against their will. The group said that there has been an increase in particular among girls from war-torn Syria.

One of the reasons is that families want to both financially and physically secure their daughters. But the consequences can be devastating: girls not only drop out of school and are socially isolated, but they also are often victims of domestic and sexual abuse by the much older husbands, according to the NGO.

The World Health Organization reports that child brides are also much more vulnerable to dying from complications from pregnancy or giving birth.