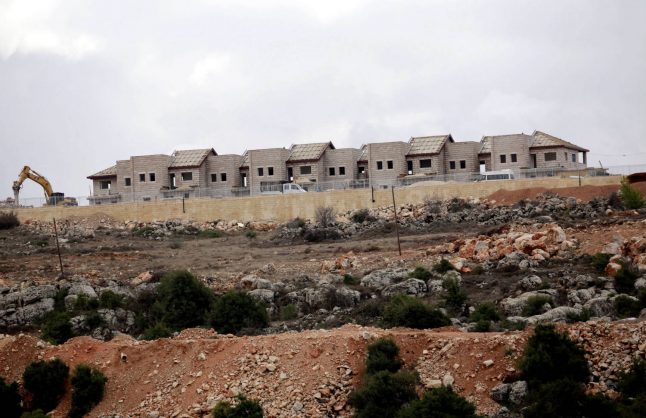 An Israeli settlement in the West Bank. Photo: DPA

The European Union has condemned the legislation, and UN Secretary-General Antonio Guterres has said it “is in contravention of international law”.

German Chancellor Angela Merkel and other top officials had been scheduled to meet with Israeli Prime Minister Benjamin Netanyahu and his cabinet on May 10th in Jerusalem.

“The two governments decided that the next German-Israeli government meetings will not take place in the spring of this year but only next year,” a German government spokesman told AFP.

“The reason for the postponement is the multitude of international meetings under the German presidency of the G20,” the spokesman added.

But Israel's Haaretz newspaper reported that the delay was intended to express Merkel's “dissatisfaction” with the new law.

The paper cited an “Israeli source who was in contact with the German Foreign Ministry and the chancellor's office,” who both expressed strong disapproval over the law.

In late January, Germany had voiced doubts on whether Israel remained committed to reaching a two-state solution after it announced an acceleration of settlements in Palestinian territory.

Until now Germany – a close ally of Israel, usually very cautious in its criticism – had merely asserted that such settlements are an obstacle to the peace process, without questioning Israel's willingness to reach an eventual peace deal with the Palestinians.

Netanyahu has said he still supports a two-state solution, but reportedly told ministers at the time that all restrictions on building settlements in east Jerusalem were being lifted.

Netanyahu, who warmly welcomed Donald Trump's election as US president, will visit the White House Wednesday to test his supportive campaign pledges against emerging policy.

The Israeli premier has announced more than 5,000 settlement homes since Trump's January 20th inauguration, as well as the first new settlement for more than 20 years.