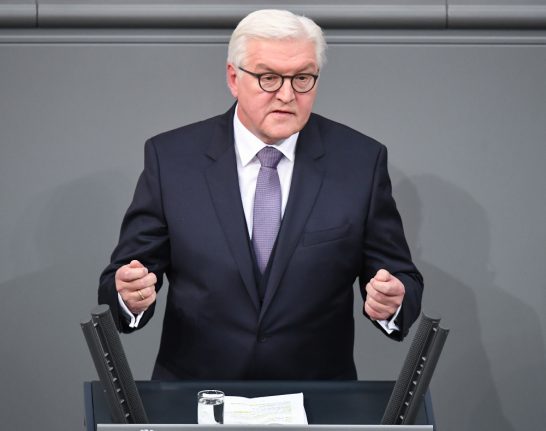 Photo: DPA
On Sunday Germany gained a new President-elect in Frank-Walter Steinmeier. He was billed as the “anti-Trump” candidate, expected to take on the new American President. But there are many, even in Germany, who don't actually know what his role is.

Frank-Walter Steinmeier was born in 1956 in the small town of Detmold in North Rhine-Westphalia. His father was a carpenter and it is said that some within Germany's political elite look down on Steinmeier for his lowly background. On the flip-side, he is often praised for having risen to such heights within the political system.

He has a doctorate of law which he was awarded in 1991 by the University of Giessen, and did his dissertation on state prevention of homelessness. He came under fire in 2013 however for allegedly having plagiarised parts of the essay; an allegation which he strongly denies.

Soon after leaving university he went to work for the state Chancellery of Lower Saxony as an advisor, and in 1993 became director of the personal office for the Minister-President of the state, and later Chancellor of Germany, Gerhard Schröder.

While serving as head of the office of the Chancellor from 1999 following Schröder's election victory, he earned himself the nickname “The Grey Efficiency” because of his ability to manage teams behind the political spotlight. Steinmeier was made responsible for Germany's intelligence services and he helped Schröder forge a coalition with Russia and France against the US's invasion of Iraq.

In the grand coalition of 2005, Merkel appointed him Foreign Minister, from where he was shifted up to Vice-Chancellor in 2007. But come the elections of 2009 his party was rejected in favour of Angela Merkel's, and he became leader of the opposition until he was given the position of Foreign Secretary again in 2013 following another election.

The most famous case is that of the innocent Murat Kurnaz, who was held by the CIA in Afghanistan and Guantanamo Bay. Steinmeier allegedly received an offer in 2002 from the US to take Kurnaz back to Germany, but refused and was accused of having caused Kurnaz's later torture in Guantanamo Bay. A later parliamentary investigation however exonerated Steinmeier.

The process by which a new President is chosen is not a simple one. It's not a direct vote by the German people, but rather the parliament calls in so-called “Electors” to vote on behalf of the nation.

The 630 members of parliament are joined by 630 “Electors” in the house.

Each different state is given a different number of Electors to send to the parliament depending on their population size, and the regional governments can vote for anybody to become an Elector. This led to the surreal situation on Sunday where politicians were mixing with film stars, the national football coach, and the nation's best known drag queen to vote for the next head of state.

Different parties can put forward their candidate, but in reality the government chooses who it wants to be President and then the vote is purely a formality. Steinmeier received 74% of the ballots with 931 votes out of 1,260, although he had expected to get over 1,000.

Role of the President

The official role of the President is as the head of state of Germany. The President often has a lot of freedom in their job, but they tend to leave the actual running of the country to the Chancellor.

The President cannot create laws or policies, but can give direction as to what the political debate should be. The President must also sign off on laws. He also has the power to veto a law.

In general however the President represents the State of Germany itself, and has a role in upholding the law and constitution. The President is obliged not to comment on current political affairs, and should stay politically neutral, staying above party politics.

Probably the most important role of the President is to represent Germany at home and abroad, and having been Foreign Minister, Steinmeier is very qualified to do this. He will now spend the next four years fulfilling his duties at home and abroad. He has promised to focus on visiting “left-behind” communities around Germany.